One of the prime concerns we hear from every single potential client is "What can we do about negative reviews?"

And often we sense that the immediate response they would most welcome would be something along the lines of "we have a mechanism that will prevent them being published, either on your own website or anywhere else."

But that's not our response. Our response is guided by two things:

Let's look at both of these:

Just let's suppose, for argument's sake, we did have a system that magically filtered out negative reviews; what would the real-world impact of such a system be?

We don't have to look far for our answer, as there are plenty of independent review sites that operate systems that favour the business, either by denying the reviewer the right to post a review unless specifically invited or by having a mechanism that allows the business to impose conditions on the publication of negative reviews.

Both these systems have the same medium to long-term effect. They drive dissatisfied customers to post to Google - the one site a business needs to look at its very best on. We see examples all the time. Here is just one...

The same business - on an independent review site (L) and on Google (R). An increasingly common disconnect, almost always caused by the business inviting 'happy' customers to post to the reviews site, leaving 'unhappy' customers no option but to post to an open site - Google being the obvious choice


Sensible business practice dictates that whatever system a business adopts it must positively welcome all kinds of reviews from everyone and anyone. After all, Google does.

What happens next is important. At HelpHound we value our own reputation as a force for good in the somewhat murky world of reviews, and to maintain that reputation means treating both sides of the review equation equally - we have to be seen to be fair and credible to both business and consumer, and we need to be seen to be adding value in both directions. That means that the business should be fairly and accurately represented through its reviews and that the consumer should be able to rely on those reviews as an aid to their purchasing decision.

Inaccurate reviews - in this case pricing - help neither business nor consumer

HelpHound's Resolution™ to the rescue - for both parties

The full process is detailed in this article. To summarise, Resolution™ is designed to minimise the chances of fake, inaccurate or misleading reviews being published, as none of these benefits anyone.

Here's an example. This review was posted recently: 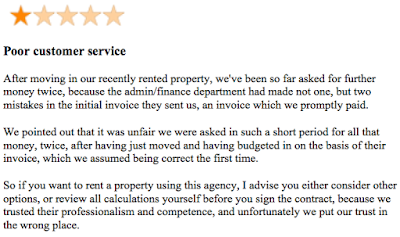 Under the terms of Resolution™ - understood by both business and their customer - the review is first submitted to the business for comment. In this case there had been misunderstandings between the two parties concerned, as well as miscommunication (there were language issues). Resolution™ allowed for private communication between both parties and, again, as of right, the customer is invited to post a review after that communication (which can be their original review, but seldom is). This is what they did post: 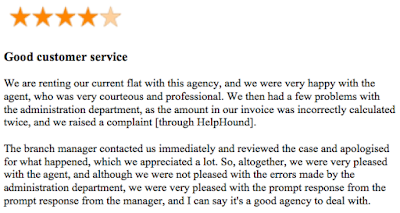 Some might say that it would be helpful for both reviews to be published (and there is nothing to stop the reviewer doing so) but that would be to assume we inhabit a perfect world in which everyone communicates in both directions every time. Far too often a consumer will post an inaccurate or misleading review - often straight to Google - leaving the business nothing to do but post its own response. But that harms the business's reputation unfairly, especially through Google's scoring system - an unfair or misleading 1* review, even responded to by the business, remains to impact the business's score - a shorthand guideline increasingly used by consumers to winnow out a shortlist (and by Google itself through its filter).

A full analysis can be found here. Two of the core principles of the CMA regulations (which have the force of law in the UK) are:
At HelpHound our clients incorporate a button like this on their websites so absolutely anyone* may write a review at any time...

And we promise to publish any genuine review. And this means that the reviewer can have an inaccurate or misleading review published. The fact that they seldom do is down to Resolution™.

And one final point: always remember that, whatever review system you employ, your competitors will often attempt to undermine it. If it favours the business at the expense of the consumer, or if it is seen to be non-compliant, that hands a significant weapon to them.


*This surprises some businesses t first, until it is pointed out to them that they often have many more stakeholders than they have customer email addresses: husband/wife/partner/neighbour/employee/potential customer/'friend' of customer/professional advisor of customer and so on...any of whom can write a review of the business to Google at the click of a mouse, and often do - unless they are given a more attractive alternative.