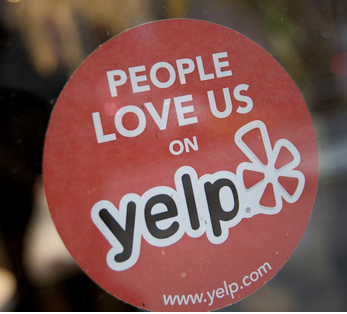 - Not outside the US and Canada, it would seem

Along with announcing a 'surprise profit' Yelp told its investors that it would be pulling out of non-US markets, according to Forbes:

"However, Yelp has struggled to gain traction abroad, and on Wednesday [said] that it would scale back its international operations. Namely, it plans to drop its sales and marketing efforts outside the U.S. and Canada."

As regular readers will know, we monitor Yelp closely (as well as all the other significant independent review sites). So what has gone wrong?

We think - and we have thought this since day one - that Yelp's business model is fatally flawed:
On top of this, the constant drip of negative publicity surrounding Yelp's algorithm/review filter and sales policies have probably impacted more in markets where Yelp was not already established. Faced with a Yelp sales-pitch their potential clients didn't have to google far to see some pretty negative noise.

The final straw was probably the state of the UK economy: in the relatively buoyant south east and London, where Yelp has focused its sales efforts, it has to have been much more difficult to attract and retain quality salespeople when their pitch was not watertight.

As we have been saying for some time: independent review sites, of whatever shape or size (Yelp is currently valued at nearly $3 billion - it's no minnow) will continue to offer significantly less value for businesses than Google-focused review strategies. Yelp pulling back to the USA simply reinforces this message. What businesses need are...


For articles relating to Yelp:

Yelp advertising in London - and their sales pitch