Reviews - back to Basics

It is sometimes difficult for us - steeped in reviews and review management as we are - to remind oursleves that not everyone else on the planet, or, indeed, in the business world, 'gets' reviews as we do.

This week we were invited to speak to an audience of business people in the South West of the UK and the questions we were asked demonstrated the need for a 'nuts and bolts' explanation. It was also made abundantly apparrent that businesses have been confused by the array of offerings being promoted to them - we will look at these too.

This article is going to go right back to the early days of the 'Interweb' and explain exactly where reviews and review management fit into a business's strategy and planning. We have included links to Wikipedia for those who would like fuller explanations and have tried to make the headings self-explanantory so you can skip those you don't need to read.

In the beginning...there was the world wide web, then there were browsers and search engines

...there was the world wide web. No one had access to it without being a) in the US military or b) a graduate of the Massachussets Institute of Technology (or Tim Berners-Lee, obviously - because he invented it all). Then there were 'browsers'. Browsers enabled ordinary folk to connect their computers up to the world wide web (soon, thankfully, to be known simply as the 'web' and 'search' for information that others - mostly eductional establishments and businesses - had 'uploaded' on the the web.

Early browsers - you probably remember the first one you used; was it Netscape Navigator, or maybe Still is Internet Explorer. Later on Apple came up with Safari and Google came up with Chrome.

Browsers should not be - but often are - consfused with 'search engines'. Some people find it easy to remember that a browser is like the library door and the search engine is the librarian.

You browse with Chrome and search with Google.

Search engines gave you lists of 'relevant' information - and ads...

Loads of ads. 'Banner' ads (the ones accross the top and bottom) and skyscraper ads (the ones up the side. The search engines sold ads in the same way as newspapers: 'Buy an ad, that'll be £500 please'. Like this... 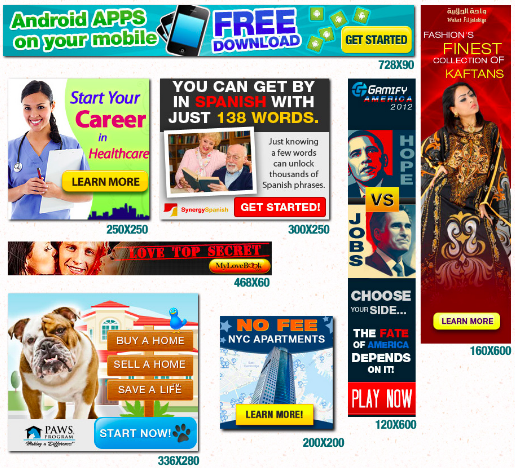 I know it's hard to believe nowadays, but these ads were sold on 'size' - see the pixel dimensions next to each ad!

They were then displayed above or beside the search directory, like this... 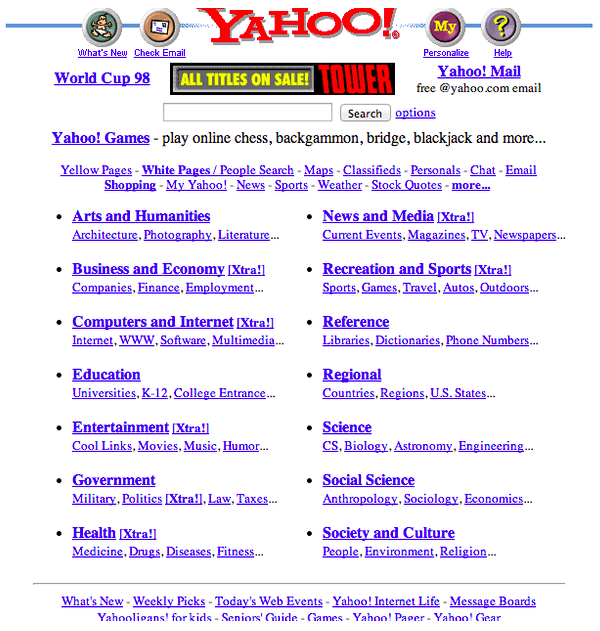 ...Tower Records has now gone the way of this kind of search - replaced by two twenty-somethings who had the idea that businesses would rather pay if their ads were actually clicked on and then fed the customer straight through to the business's own website. Their business? Google. 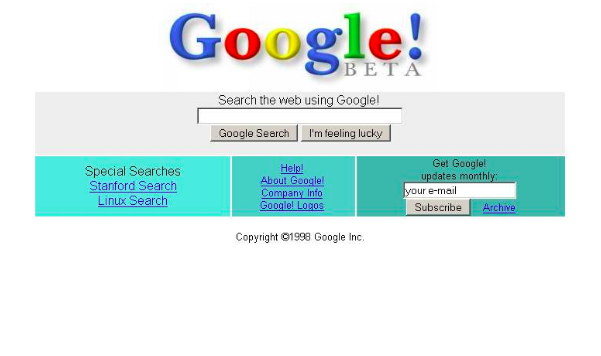 The first Google home (search) page...staggering how little it's changed, when you think about it.

Anecdote alert! Jeff Bezos was one of Google's initial backers - does everything he touches (Amazon) turn to gold?

Anecdote alert 2! Google's founders, Sergei Brin and Larry Page decided they wanted to sell Google to Excite. They went to George Bell - Excite's CEO and offered to sell it to him for $1 million. He rejected the offer. Vinod Khosla, one of Excite's venture capitalists, talked the duo down to $750,000, but Bell still rejected it. A true 'Dick Rowe' moment - except that Dick Rowe did sign the Rolling Stones.

Google's genius was to combine natural - sometimes known as organic - search where links to businesses are delivered based on popularity (OK, we know there are other factors, but 'popularity' will do for the purposes of this article) with advertsements based on a 'pay per click' model. In theory a business coudl run an advertisment - lineage only, no images - on Google and customers could see that ad and pick up the phone or visit the business, but Google had done their homework: the overwhelming majority soon learned that clicking on the ad would take them to the website behind it, and that's where Google made money - by charging for each of those clicks.

Here was the new world. The only answer was to pay or not to pay? - or rather: 'to pay Google or a web designer'?

This confused plenty of businesses and there was no lack of snake-oil salesmen (did someone mention SEO?!) who would relieve thousands of businesses of huge lumps of cash on the basis that 'you won't need to advertise with Google, we'll get you showing on page one of natural search'.

Why we businessmen didn't relaise sooner - maybe some did -  that this is exactly what they were telling all of the boys, and only ten of those 'boys' were ever going to appear on page one for any given search. Google must have stood by laughing - they must have loved the uncertainty this generated amongst marketing executives, and, of course, the advertising people weren't averse to it; after all, they were trousering lovely commissions for sellling Google PPC to their clients who demanded to appear on page 1 whatever the price!

The flaw in Google...

There's a flaw in Google? The flaw in Google was - and remains - that its search results are not qualitative. Let us explain, because this is important.

When anyone searches the web, using Google, what do they want? Really want?


or...
simple really, when you think about is, isn't it. We won't go into why Google does not supply the very thing their users want - directly. What we will do is explain why a whole global industry grew up to fulfil that role.

And the name of that industry - REVIEWS SITES!

At last! 'You got there in the end' we hear you say. Unfortunately we are not quite finished yet - there is a twist in the tail.

If Google gave us the best 'plumber' near us (or near where we wanted to be), then we would never have needed any of these...
...and all the hundreds of others to help us find that 'plumber/hotel/dentist/lawyer'.

Google wakes from its slumber...

Goodness, how long it took Google to wake up to the fact that people needed a review site to help them make sense of a lot of their Google searches. But wake up thay eventually did - and how savagely unfair on those reviews sites it was when they did.

Google first tiptoed into the world of reviews when it introduced Google Places (pretty well buried behind Google Maps) which eventually morphed into Google+ Local. Now anyone could write a review on Google. And, it goes without saying - read a review on Google.

At one fell swoop Google had sounded the death knell of reviews sites (how thrilled must the owners of Zagat have been, when they realised they sold to Google just in time? No-one needs a restaurant reviews site now).

And: no-one needs...
...we guess you are getting the point...they just need Google (unless, of course, the business in question is still using - and paying for - an 'old-fashioned' reviews site).

The reviews sites won't disappear in a puff of smoke overnight - after all the canals are still here over 150 years after the invention of the railway (and lots of those reviews sites have significant capital behind them, albeit draining away like Yelp's)...

...but it is HelpHound's job to make sure our clients are advised to catch the 11.05 to Birmingham from Euston, not the four-day-journey narrowboat.

Reviews and review management in 2018

As we have been advising clients for over four years now, their primary focus - if they don't want to spend a fortune on advertising (and indeed, waste that money - because consumers now invaribly check out a business's reviews pre-purchase - 93% of them,according to the Chartered Institute of Marketing's most up-to-date figures, so what is the point of advertising if it's going to be contradicted by your reviews?) has to be Google reviews.

Looking good in a search on their business... 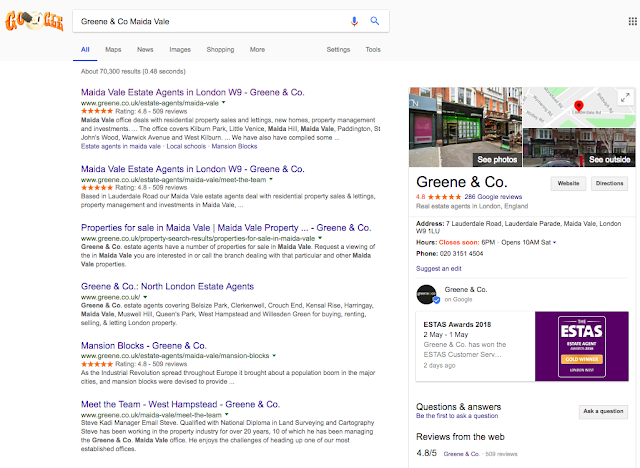 Having nerly three hundred Google reviews - all attched to a verified Google+ account - and highly visible in every search helps the consumer choose the right business. Having oover 500 of your business's own reviews showing in natural search and 'Reviews from the web' reinforces the trust those Google reviews create.

and looking good in a local search... 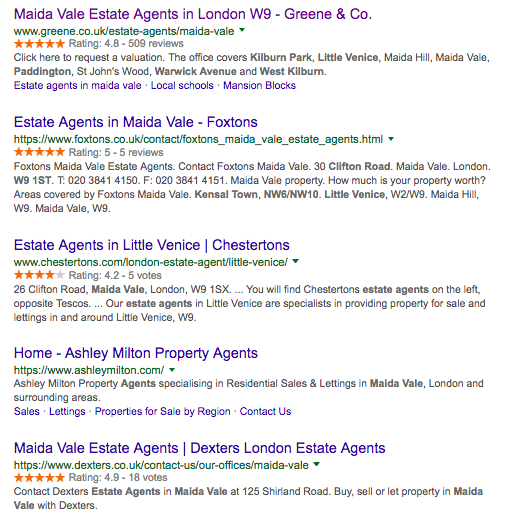 Consumers are, understandably, cynical about reviews - just see this artcle about fake reviews and the recent BBC programme - so having over 500 of them goes a long way to allaying fears that they are 'only written by firends and connections'

Until? Yes - until Google finds a way to do what logic overwhelmingly dictates - rank businesses in search by their reviews score!

Will your business be ready then?

...where does HelpHound come in?

HelpHound provides three essential services for our member businesses...
...and, on top of these, we keep a watching brief over every aspect of the reviews market (there are nearly a thousand articles on the Blog alone - covering every concievable event that has impacted reviews over the recent past), so our members can relax in the knowledge that they have 24/7 coverage of the complex and ever-changing reviews scene.
Posted by HelpHound at 19:13