A review is damaging your business - should you sue the reviewer? 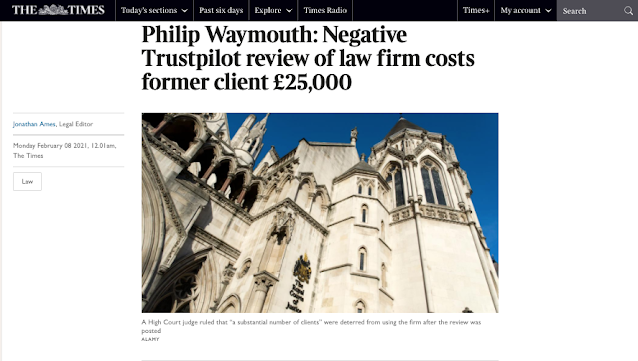 A link for Times subscribers, substantially the same article in the Mail (free to view)

Many readers will have seen the story about the solicitor who successfully sued their client and won £25,000 in damages, plus an order for Trustpilot to take the offending review down. Is this a strategy that we would advise? 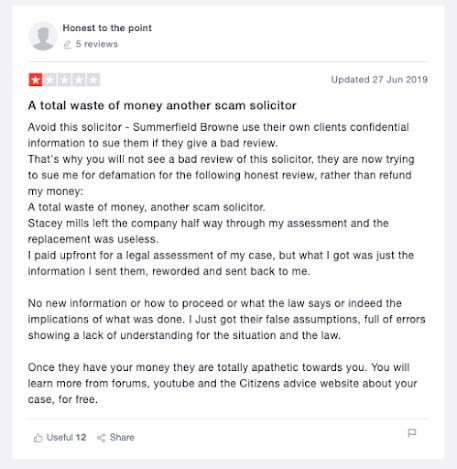 Second: on what basis did the judge make the award in favor of the claimant (the firm of solicitors)? We will let the judge speak for himself:
"Mr Bradshaw [the counsel for the claimant] submits that the allegation of dishonesty made that the Defendant is that it is "a scam solicitor", has the plain meaning that the Claimant is dishonest and fraudulent. The Defendant seeks to present this as an opinion. Mr Bradshaw argues this is impermissible, the Defendant is putting forward the Claimant's dishonesty as a matter of fact and cannot simply say by way of defence "this is my opinion". In the circumstances, I accept the law is as stated in Wasserman v Freilich and am satisfied Mr Bradshaw's submission is correct, with the result the defence of honest opinion should be struck out.
His full adjudication is to be found here.
While this may have severe long term implications for Trustpilot, we are mainly concerned with the implications for the business - in the short and long term - in this article.
The short term impact - pre-court
The claimant states and the judge has accepted, that the main financial harm done by this single review was a reduction of enquiries (and, by implication, the fees that would otherwise have flowed from those enquiries), fell - again, as a direct result of that one review - by nearly 40 percent. The resulting damages awarded by the court are direct compensation for that loss.
The short term impact - post-court

To fully appreciate this we need to look at two before-and-after scenarios: on Trustpilot and, far more importantly, on Google. 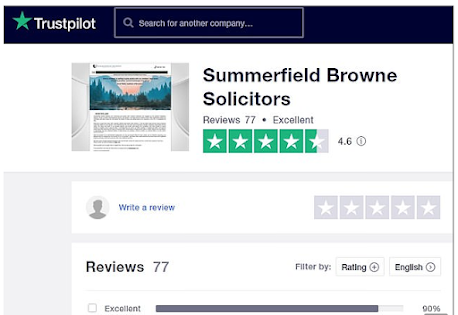 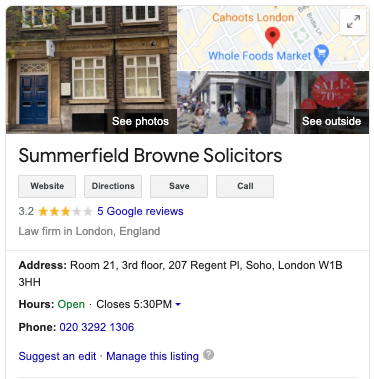 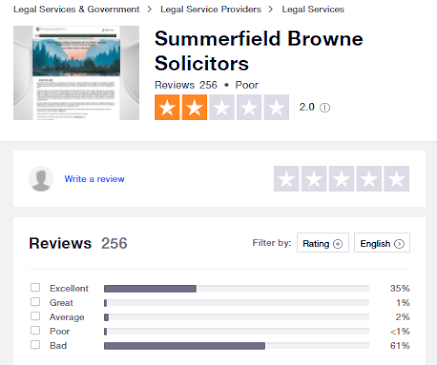 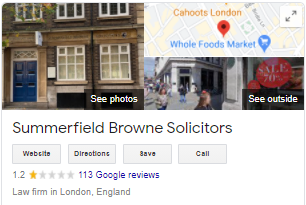 What has happened?
You may remember the high-profile case of the Red Hen, a Democrat supporting restaurant in Lexington, Virginia that was reported to have ejected Sarah Sanders, the then President Trump's press secretary. What happened next was what the web calls a 'pile-on', where supporters of either, in this instance, political side write reviews, irrespective of the fact that none of the reviewers themselves has any direct experience of eating at said restaurant. It even impacted the wider town economy.
The people involved in the pile-on write two kinds of review: the first kind makes no attempt to look like a genuine review of the business and simply either supports or criticises the political (in our case strategic) stance taken by the restaurant; the second - and, some might say, cleverer - review purports to have visited the establishment (in our case, been a client of) and rates it as 'excellent' or 'poor' depending on their political affiliation (in our case, personal point of view).
What you see in the screenshots above is one of the most extreme examples of a pile-on we have ever seen in the UK (there was a questionably funny one of a flop-house in Glasgow that was boosted into the top 100 hotels in the UK there a few years ago).
The reviews are almost all along these lines (Trustpilot): 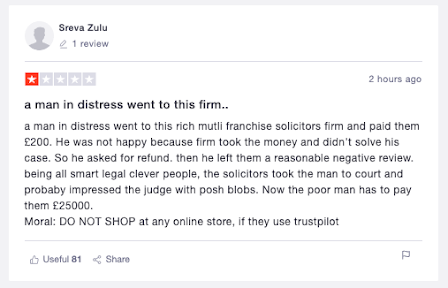 If that weren't enough, look at the up-votes from those who support the 'reviewer's' position.
And, lo-and-behold, another review from the defendant (or, at least, someone purporting to be him): 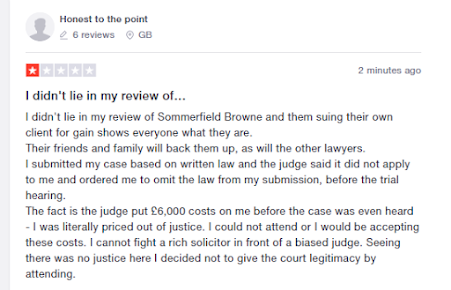 Now the medium to long-term impact
On Summerfield Browne
If we accept that the one single review impacted enquiries and resulting fee income by nearly forty percent, what now?
We can only apply common sense combined with our considerable experience - over ten years of helping businesses with what they have considered inaccurate, misleading or just plain unfair reviews. Just one Google review, based on the reviewer having watched a TV programme featuring the hotel in question, resulted in the business's phone going completely quiet. No bookings whatsoever.
Here's the offending review on Google - which we were able to get taken down, to the intense relief of the management:

The point here is much more a PR question than a legal one. We cannot be positively sure what our exact advice to Summerfield Browne would have been without access to all the facts of the case, but based on the review itself this would have been as follows:

1. Respond to the review on Trustpilot - no need to join or pay Trustpilot, simply respond on the site with a reasoned and reasonable answer to all the points the review raised, remembering not to breach confidentiality and that the reviewer always has the right to post a subsequent review.

2.  Adopt a proactive review management strategy to get a consistent flow of reviews to both Google and Trustpilot, with the objective of ensuring that the overwhelming majority of reviews reflect the reality of the business.*

*Bearing in mind that the CMA regulations stipulate that any business inviting reviews must enable all of their customers to do so. See here for more details on this important subject.

But we have no doubt whatsoever that the impact of both the multitude of press coverage plus the company's image in search and on the review sites, both Trustpilot and much more importantly Google - where they had a reasonably clean sheet up until last week - will be detrimental.

On Trustpilot
Section 40 of the judge's finding reads:
"In the circumstances I will make a s.13 order requiring Trustpilot to remove the defamatory review, on the basis that the Defendant's conduct to date makes it doubtful that he will comply with the injunctive relief the Claimant has been granted.
Well, Trustpilot directors are probably sitting around a boardroom table in Copenhagen right at this minute having an interesting legal conversation to decide whether they should comply with the judge's instructions to them (as of going to press they have yet to delete the offending review, but they have suspended new reviews to Summerfield Browne's listing).
It will also be interesting to see if Trustpilot applies to the Court:
"As Trustpilot has not been present or represented at this hearing the order will contain a provision that it may apply to the Court for the order to be varied or discharged."
Why so interesting? Because on the basis of the Judge's ruling it is arguable that a huge volume of reviews hosted on Trustpilot could be actionable - a simple Google search on 'Trustpilot scam' returns 5.6 million results. Another similar search on a high-profile Trustpilot client, Purplebricks returns nearly 3,000 results alone. 'Scam' would appear to be a very popular word amongst online reviewers with a negative opinion of the business they are reviewing
People will soon stop using Trustpilot and similar sites if they think a loosely worded review may cost them £25,000!
Update 10 February 2021: Trustpilot today added this to Summerfield Browne's listing, and closed it for new reviews:

In summary
There are salutary lessons here for all businesses:
And the $64,000 dollar one here: