A while ago we offered our services to this restaurant (simply because it was one of our staffer's local hostelry, and he wanted us to help them): 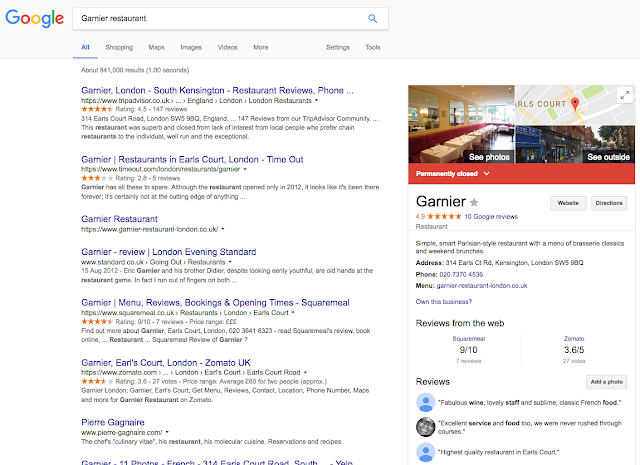 And now, as you can see, it's closed. Which is sad, because we enjoyed our occasional Friday lunchtime sessions there.

Now, we are far from saying that being a member of HelpHound on its own could have saved Garnier, but let's look at the facts:
What should they have done (and what should every other restaurant do)?
Let's look at the numbers per annum (working per 100 covers/day):
On top of that - the restaurant has garnered (no pun...) many thousands of contacts for its other marketing.

*Harvesting email addresses: all that is needed is a card and a pencil - and a dose of charm. It works.

It doesn't stop there...

The restaurant - or its agents - should respond to those reviews, all of them. Why? First because it sends a very positive message to potential customers: if the restaurant cares about its online image then perhaps it cares about the quality of its food and customer service. Second, because responding to reviews keeps reviewers honest - it makes it much less likely that rogue reviewers will exaggerate any negative experiences that may have had.

Look at this review (of another restaurant):

And then this one: 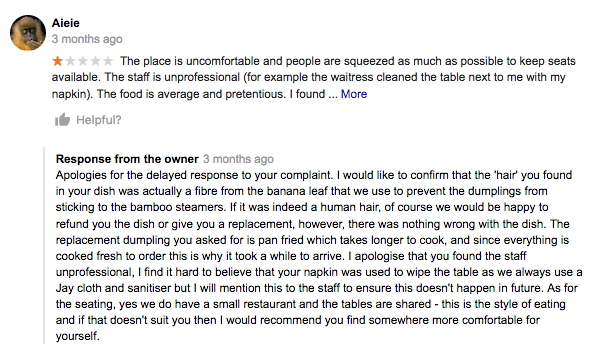 Both of these reviews have the ring of truth about them. But doesn't the first one - lacking a response from the business - reduce the likelihood that you're going to choose the restaurant for your next outing?

Point made? There's one more piece of advice: take reviews that criticise service much more seriously than those that criticise food. The late lamented A A Gill, when writing his Christmas 'review of reviews' a few years ago, stressed that he would be much more likely to forgive erratic cuisine if service was top-rate.

Besides giving you the mechanism to invite and display reviews, HelpHound also incorporates an optional response service: Feedback Manager. So, if you are too busy, or lack the capacity to respond to reviews, we are here to help.