Yesterday TripAdvisor released the results of a major survey of traveller behaviour - you can read a good summary by Hospitality.net here.

This survey needs to be taken in context. According to a report by Market Metrix which compares TripAdvisor users' behaviour with results from hotels' own surveys "there were nearly 300% more negative responses (1- and 2-star ratings) when compared to survey research, and positive responses (5-star ratings) were underrepresented by 35%." They call this the 'Negative Tilt': 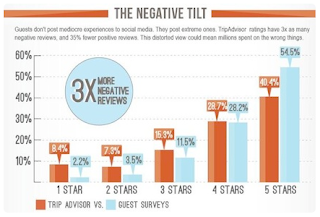 This dovetails with our own analysis and anecdotal evidence from hotel clients. In reality the 'tilt' is even greater. Why?

Because the silent majority don't write reviews (and don't respond to guest surveys either).

Let's expand on this:

A recent client - a hotel in London which has recently undergone a change of ownership and complete refurbishment (significant enough for TripAdvisor to delete previous reviews) has had nearly 5000 guests since then. They have received less than 20 reviews on TripAdvisor - almost half of those being negative.

They have done 'better than average' (on the figures above you might expect them to have about 4 reviews) but has this helped them? No - because unhappy guests are MUCH more likely to post a review than the 'silent majority' of happy guests. And everyone in the hotel trade knows how damaging negative reviews on TripAdvisor can be - driving the hotel's relative ranking down and impacting on bookings/occupancy/rates, especially when the negative remains on page 1.

There are two alternatives - denial (and we do come across this) or a proactive effort to engage with the 'silent majority'.


Dialogue™ - engaging with the 'silent majority'

Response rates to Dialogue vary from 4-6% (more for hotels who maximise* their engagement). And Resolution's success in enabling clients to manage negatives means that very few of those are ultimately published.

This gives our hotel clients a much better chance of getting the satisfied 'silent majority' to voice their opinion - both to their own websites and then on to TripAdvisor - with a fighting chance of enhancing their rankings - leading to wins in occupancy and rates as well as the potential for increased direct bookings through their own websites.

* Contact Karen or your business membership advisor for details

P.S. This works for Booking.com and the other OTAs as well - see this recent post