ABC of Reviews: 1. Do reviews matter?

There are two straightforward answers to this question:

1. From a consumer perspective...

Consumers have come to rely more and more on reviews, especially for critical purchasing decisions. Critical purchases? You guessed right, we are not talking shoes or pizzas here (although consumers do read reviews of those) but the likes of financial, medical and legal services. In this context four things matter...


So: consumers want reviews. And consumers are influenced to use - or, at the very least, make contact with - businesses that host reviews on their own websites and look great on Google.

2. From a business perspective

Businesses now accept that great reviews - and the resulting reviews score  - drive business, but why did it take so long for the penny to drop for so many of them?

The answer is simple and can be summed up in one word: fear. Fear that inviting consumer reviews would damage their brand. A man walks into a bar and criticises a business and maybe two people are influenced; man writes a review like this on Google and just about every potential customer is influenced. Scary, no? 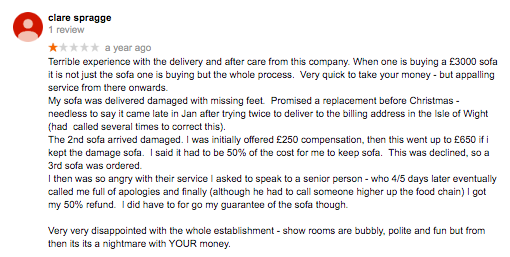 This is what we call a 'killer' review. It has not been written by a 'keyboard warrior' - it's her first-ever review - but by a customer who, on the face of the evidence provided, has every reason to be dissatisfied combined with every reason to want to warn fellow consumers. It helps provide the answer to the question of whether or not to engage with reviews: the business in question has not engaged, but that did not prevent this - highly motivated - customer posting her review where it would be seen and read by thousands of their potential customers.

Many (most?) businesses looked at reviews and saw two possible ways ahead, either ignore them completely or engage but ignore the consumer regulations - the law - and the reviews sites' own T&Cs.

Ignoring reviews leaves a business open to having its online reputation (for that read simply 'reputation') dominated by its unhappy customers - rightly or wrongly. Breaking the law, most often by hand picking satisfied customers to write reviews, not only leaves a business open to sanction by the regulators but is also obvious to its competitors,. Take this estate agency, for example... 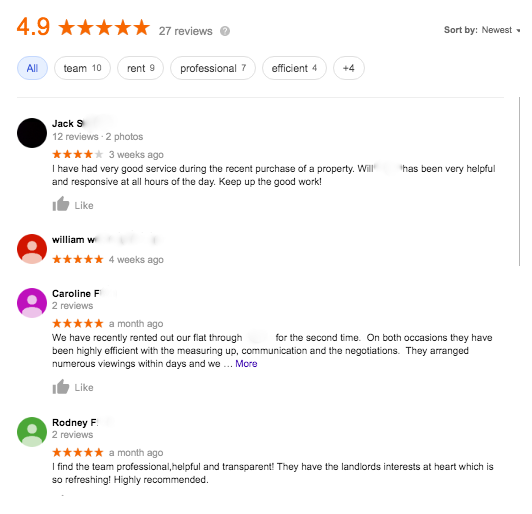 ...if they had a small handful of reviews it would be possible to conclude that they had all been written by genuine customers unprompted by the business. With 27 over the last four years and then four in a month one is forced to come to the conclusion that they have proactively invited only selected customers to post a review - which is in direct contravention of the CMA regulations (more later) and leaves them open to - perhaps justifiable - criticism by their competitors along the lines of 'of course they look great, they only invite a highly selective sample of their customers to write a review.'

So...
And one to be answered in a future article, now we have established the answer to the question posed in the title of this piece.

If you would like to be sent future articles in this series and are not already subscribed to our blog you are welcome to do so - see the 'Subscribe' box just above 'Popular posts' on the right. You won't be added to any email lists and, as the old saying goes: 'no salesman will call'.