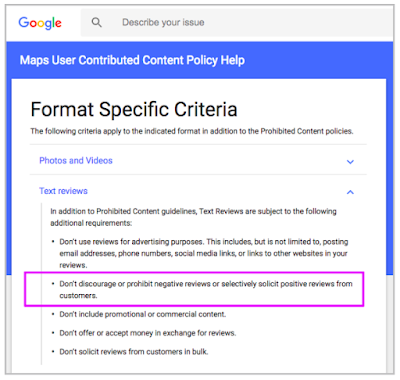 For years now we have sometimes been frustrated by our inability to convince some businesses that gaming Google was a bad idea. Read the 'Introduction' below and then we will go into some detail on 'Gating' and the other mechanisms both businesses - and some reviews sites - use to bend (more often break) the UK CMA rules and Google's terms of service to their advantage.

Reviews exist for one purpose - and one purpose only - to assist consumers when it comes to making an informed choice as to which business or service to buy or use.

The expression 'informed choice' is critically important here: for reviews to be effective they must be trustworthy, not 'a bit trustworthy' or 'mostly trustworthy' - just trustworthy. That does not mean to say that every reviews system must be perfect, but to deliver it must do its very best to ensure...


and there are rules in place to enforce that, the UK CMA regulations (again!) and now Google have added anti-gating to their term of service.

Why? And what were/are they doing?

Service businesses (as opposed to online retailers - which can live with a Google score as low as 4 out of 5 stars*) realised some time go that just one well-written Google review had - and increasingly has - the ability to 'stop the phones ringing'. Often they then adopted one of the following four strategies described below...

*while a score of 4 out of 5 may look alright, even good - at first glance - it will deflect customers from making contact with service businesses. Why? Because a business scoring that 4.0 with 100 reviews will have up to 20 one star reviews, and those will be read by prospective customers, and will put a significant number off taking the next step: contacting the business. 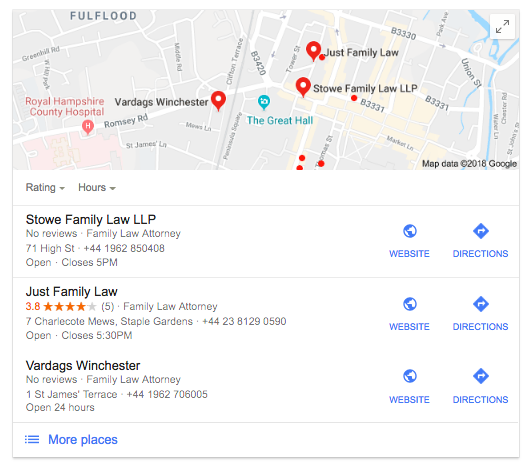 Here's a typical local search - the kind most people seeking a business make every time. What have the three business's listed in the Google knowledge panel (the holy grail of SEO) done to say 'come to us, we're great at what we do'? Little or nothing - classic cases of 'Denial'.

Denial was definitely the simplest solution - and was adopted, consciously or unconsciously, by many. It involves ignoring Google reviews altogether. They just did not engage - and hoped that their customers would not write [negative] reviews to Google. 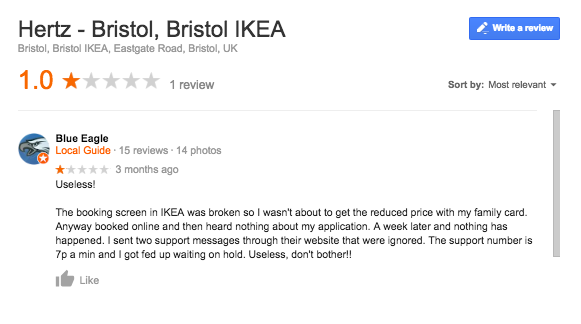 No reviews until three months ago and then...a Google score of 1.0 (and failing the Google filter). Not helped by the fact that the review is written by a Local Guide (their reviews are given more weight, both by Google and by users)

Consequences: Initially - no Google reviews to encourage those searching for a 'consumer qualified' business to click through a search to that business. Ultimately - two things: first, the business's first review is highly likely to be a negative one (simply because human nature dictates that a dissatisfied customer has so much more motivation to write a review), starting their Google score at 1.0 out of 5, second: the business will increasingly stand out against its 'engaged' competitors, some of whom will be doing 2, 3 or 4 below.

This (score and number of reviews) is, of itself, no proof of cherry-picking. But when you know the business and its staff, both current and previous, its competitors and ultimately the regulators (especially if a complaint is made) take an interest, and then combine this with the pattern of reviews, then there is cause for concern.

This is the next obvious step on from denial (and by far the most popular - especially when the business has received a negative review and is in 'panic mode'): simply ask only proven 'happy' customers to write reviews.

Consequences: Initially: the business looks great - of course it does. But this practice was outlawed by the UK Competitions and Markets Authority in 2015. Read their regulations - which apply to all UK businesses - here.

Use an independent reviews site that offers some kind of filtering mechanism, either restricting consumers' ability to write a review: allowing the business to determine to whom and when the review invitation is sent/locking out anyone else or incorporating a mechanism that would lessen the impact of that negative review: allowing the business to challenge it and then insisting on 'proof of purchase' before publishing the review - forcing the [negative] reviews down the reviews timeline (who reads page 2?).

Consequences: this drives disgruntled customers to post to a site that does allow them to post a negative review, a syndrome that we call 'Deflection' (a 'must read'). Which site? Maybe Yelp, maybe TripAdvisor (in the case of hospitality) but the overwhelming site of choice in 2018? Google. This results in the business looking good on the reviews site but much less good on Google - in other words, it is not only contravening the regulations, it is also backfiring on the business in the worst possible way.

Put simply: use a mechanism to establish which of the businesses customers' were most likely to write a 5* review and then invite all of that subset to post a review to Google. Very common with apps, where good reviews scores are everything, and increasingly common with all other kinds of business.

When a business has few reviews (with mixed results) on Google for an extended period, but many on another reviews site and then suddenly acquires a flood of great Google reviews, it raises suspicions of gating. We have obscured anything that could identify the business in question because that would be unfair, but it would be easy for the regulators to conduct an audit and equally easy for Google to spot if such behaviour had been happening.

This is done in one of two ways...

Consequences: until now - few. If a competitor noticed then they might use that against the business: 'Of course their Google rating is excellent - you do know they are only inviting happy customers to post reviews?' - and also a form of cherry-picking (see 2 above). 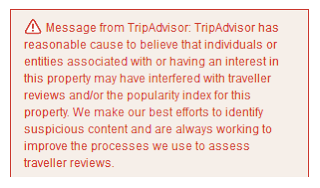 an example of a TripAdvisor 'red flag'

Now: Google will delete the suspect reviews. And we don't know yet what other sanctions Google will apply (TripAdvisor and Yelp 'red flag' businesses in similar circumstances) but it is possible that Google will deem that all the reviews of the business in question - and their vital reviews score - have been acquired by gating.

One version of a Yelp 'red flag'

On top of this, gating contravenes the CMA regulations, which are expressly written to ensure consumers get a full and fair impression of the business in question.

We have a great deal of sympathy for businesses that have adopted one of the above means of protecting their reputations from what they, mostly quite justifiably, see as unwarranted or unfair attack on the most important platform on the web - Google, as long as they have done so in all innocence.

We thought the world had moved on from this, but still some businesses persist in misnaming testimonials (selected customer opinions) as reviews... 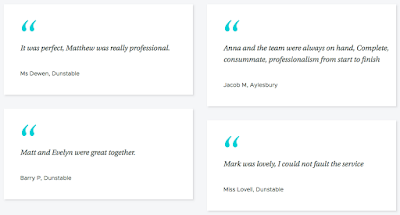 ...just to be absolutely clear, reviews, by definition, must be independently moderated, otherwise consumers are being misled. Some businesses are confused by the likes of... 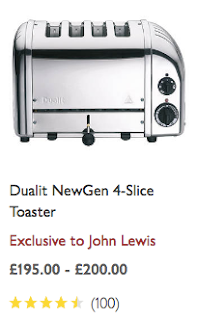 ...online retailers (John Lewis here) that host 'their own' reviews. In reality, of course, these reviews are not 'of John Lewis', they are 'of the product', manufactured by someone else (and in reality they are hugely helpful for the retailer - as well as the consumer - which will simply drop any line that scores badly).
Posted by HelpHound at 14:02