Let's get back to basics. Why do reviews exist? Answer: to help consumers choose the right product or service. And if you are a business? To encourage consumers to use your business.

So lets look at the reviews of just one business that is representative of so many - and see if they achieve that simple objective.

YOPA are currently spending big-time on advertising - you may have seen this one featuring Mo Farah on TV...


...and what do they expect their target market (home sellers) to do next? Given that Yopa has no offices to drop in to we're guessing the answer to that one is 'go online'. Go online where? Well, given that consumers in this situation are looking at what is possibly their biggest ever financial transaction it's fair to guess that a significant proportion will be looking for reviews. 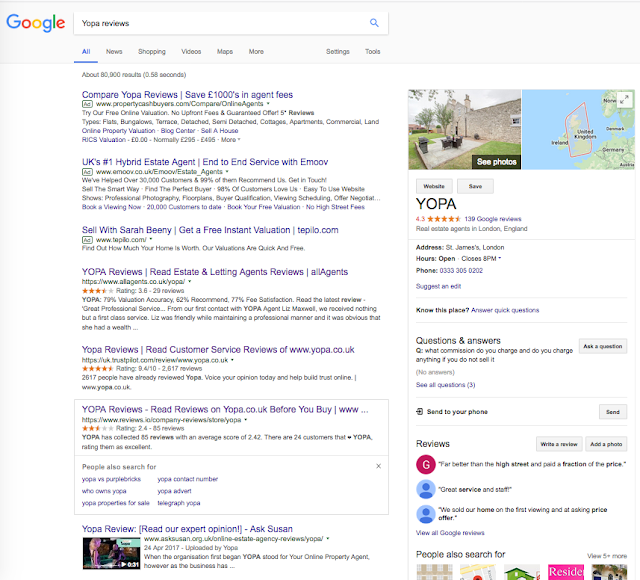 Please bear with us (if you are already beginning to lose the will...just put yourself in the position of the home seller)...and we will walk you through the minefield...

Once past the PPC advertisements we can see four sources of reviews (and star ratings), so, being concerned and responsible home-sellers we take each in turn, starting at the top with a site called AllAgents (after all, it is headed 'YOPA reviews...'). And what do we see? 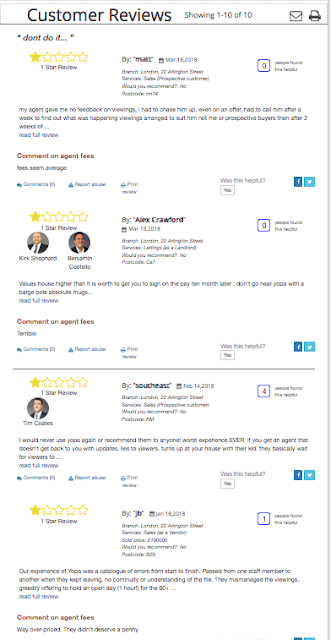 Thirty-five reviews, ten of which rate the business's service at one star, and make pretty disturbing reading

...where they look great, at least until you read any of the one-in-twenty negative reviews...

...and there are over a hundred of these. 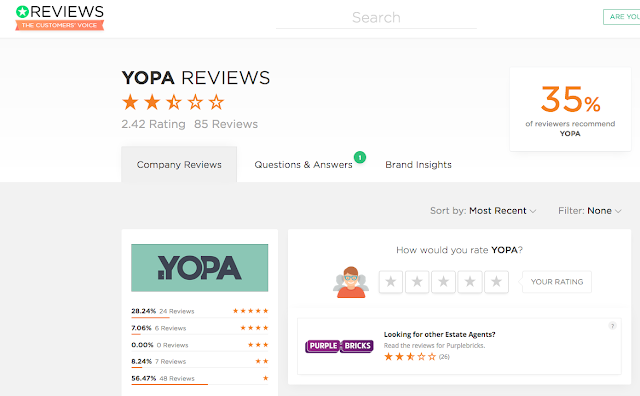 ...that helpfully tells you that only one-in-three of Yopa's customers would recommend them (not only that, it also 'helpfully' promotes a business - PurpleBricks - that we are guessing is Yopa's No.1 competitor - although their reviews on Reviews.io are even worse!).


Last, but definitely not least: Google... 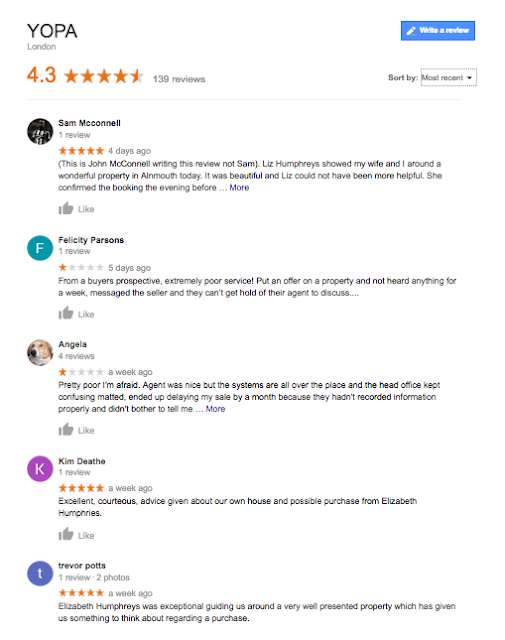 Hoorah! for a name every consumer recognises (a recent survey by Rightmove found that 8% of consumers recognised Trustpilot, ahead of the 2% who recognised Feefo)... and a respectable score, but still an increasing volume of worrying - for both business and consumer - negative reviews, not all of which accurately reflect the true position.

What to do? That's the key question that every business needs to ask itself if its review management is not to undermine its marketing, and the answer for the consumer feeds directly from the answer for the business. Here it is... 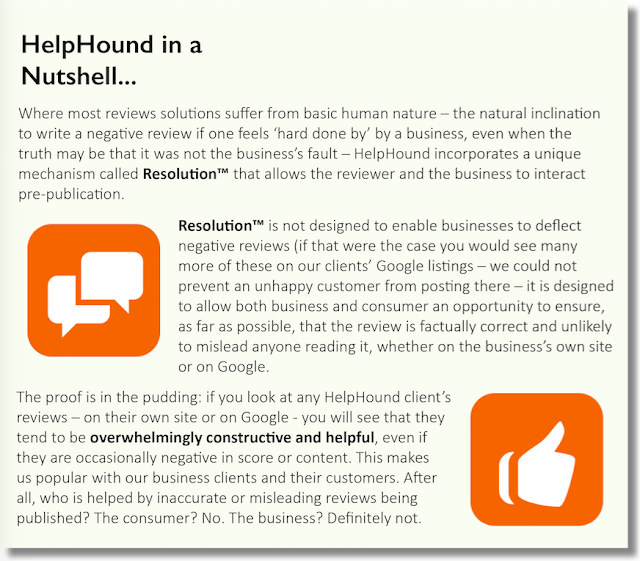 Then the consumer will see...
...and the business will see:
At the end of the day we have been confidently predicting Google's dominance - total dominance - in the reviews space for over four years now (and advising our clients accordingly). We are glad that we have - and so are our clients.

There are only two things preventing any business taking the correct course of action (reviews on their own site and reviews to Google) are...
If you are concerned about inviting unfair negative reviews - as you should be - read this article. If you want to understand the consequences of using an independent reviews site instead of Google - read this.


*Let us tell you a true story. Once upon a time (in 2012, as it happens) the world's biggest independent reviews site opened its London office and began actively marketing itself to UK businesses. Those businesses that are convinced by the review site's sales pitch invest significant resources, in both cash and time - not to mention their brand's credibility - in building their presence on that site. The site's name? Yelp. And what did Yelp do, four years later, after all those resources and effort had been committed by those businesses? It left the UK.

We have said it once already in this article (and many times over the years): own your own reviews - and then get them where they will have the most influence: Google.

And to make it even more plain: HelpHound, as review managers, stand or fall on the quality of the advice we give to our clients, of which this blog is part of an extensive written record. We have no inherent bias against the independent reviews sites and if and when they deliver results we will be the first to recommend them to our clients. We are not remunerated a single penny by Google, either directly or indirectly (not many independent reviews sites can say that) and include them in our recommendations as a matter of 'best advice'.