Unfair and damaging reviews? Appeal them!

Unfair, inaccurate or misleading reviews harm your business - any business that has been subject to one knows that. They also harm your potential customers, who, but for reading one of these reviews ('killer' reviews, we call them) might have been far better off doing business with you.

In a word: Appeal.

How? By following - and following, precisely - the appeals mechanism laid down by the site that you are appealing to. The most common mistake made by businesses that come to us with failed appeals is that they ignored the relevant terms and conditions and appealed the review on the basis that it was factually incorrect. Few reviews sites will allow an appeal on the basis of the business's word against the reviewers, partly because most sites are US-based and have an inbuilt bias in favour of 'freedom of speech' and partly because, understandably (if frustratingly for the business) they don't want to become embroiled in a trade dispute.

One thing we have learned from hard experience is to relate every aspect of the appeal to those terms and conditions and to eliminate any trace of emotion (often difficult for the person under review).

We routinely conduct appeals on behalf of our clients, with a success rate of roughly 50% (it would be higher, but experience has taught us that some of the appeals where we would rate our clients' chances of success at virtually nil can succeed, and - given how damaging such reviews can be, sometimes literally causing a business's telephone to stop ringing (there's an example of that here that made the national press) we continue to advise that certain appeals with an outside chance of success are pursued.

Google is, by far and away, number one. A harmful Google review has more power than any other, no matter what business it relates to, and should be treated as such. But most responsible reviews sites have appeal procedures (TripAdvisor's is a model others could do well to emulate). Here is the text of two reviews that we have recently appealed - successfully: 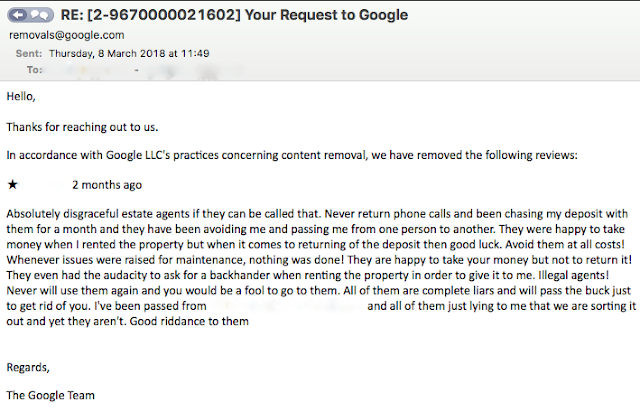 We're sure you can imagine the harm this review was doing, being served when anyone googled the business in question

If this was your business, how would you, and your management and staff, feel waking up to this every day? Unfair negative reviews sap morale - and they are read - and believed - by consumers.


Indicators of potential for a successful appeal

The following should not be taken as a definitive list, we have seen appeals that we would assume have a ninety per cent chance of success (no appeal has 100%) fail, and those with a twenty per cent chance succeed...

Google needs to be trusted by its users - and delivering them reviews that they can trust is key to this, so a successful appeal is a win/win - for the business and for Google.

Speak to us, it won't cost you a penny - and it is most certainly not in our interest to encourage you to pursue appeals with little prospect of success. We will advise you if that is the case straight away, but if we consider the review(s) appealable we will tell you exactly how the procedure works, and we will write the appeal for you - the decision is then yours.