Google Local Guides - there are downsides

We introduced you to Google Local Guides here. It's a great system - especially for consumers, especially because they know for sure that they are reading a review by a 'real' person, but there are some downsides.

People, being people, have differing character traits, some are motivated by greed, some by altruism, and Google Local Guides are no exception. Google rewards guides for writing more reviews, correcting maps and much more... 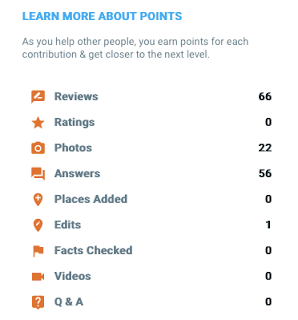 ...and, for the overwhelming majority, that's just what they do. But a minority can get carried away. Just like the boy collecting stamps, they can be in a hurry to 'fill that page'. In Google terms: 'in a hurry to reach the next level' (or even to get an invitation to the holy grail of Local Guides - the annual summit in San Francisco).

That, of itself, is not a problem - what could go wrong? Well, as Yelp - who invented the concept with their 'Yelp Elite' - know only too well, some people get carried away. We have just seen evidence of this, where a client of ours was reviewed by a Local Guide.

The review - a 1* negative - was posted last week.

...as were thirty-eight further reviews; all one-liners (nothing wrong with that, no contravention of Google T&Cs)... 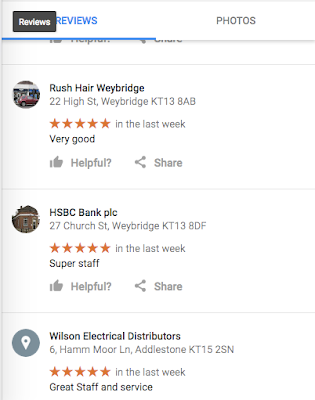 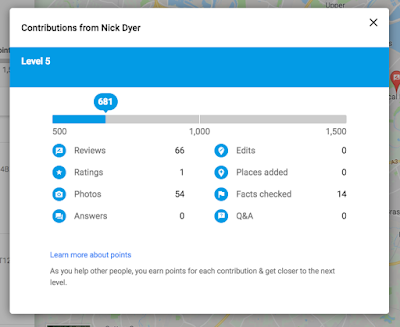 Where do we take issue?

Google reviews are powerful - people do take notice of them, whether consciously or unconsciously, of that there is not a smidgin of lingering doubt. They create an instant first impression - through both the score and the content of the reviews.

We are suggesting that Google modify their T&Cs, which currently look like this: 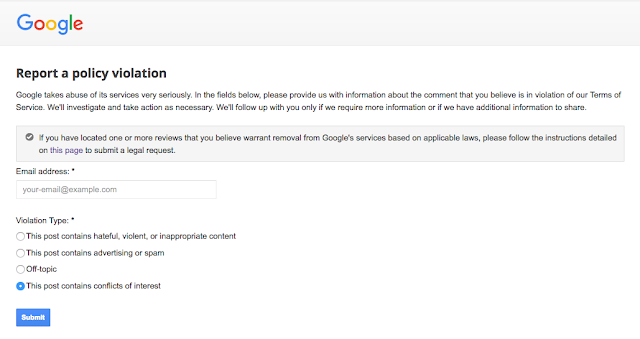 There are two important issues here: the first is contained in the grey highlighted box: 'the review breaks the law'; in a nutshell this means it is libelous (accusing the business or a staff member of acting illegally) and the second is the four categories under 'Violation type' - which, significantly, excludes 'This post is untrue'.

The reason for that exclusion is that Google do not want to get involved in arbitrating between two parties in a commercial disagreement, and that is fair enough, as far as it goes. But we would contend that Google reviews carry so much power and influence that there should be some burden on the reviewer to verify their comments if the business flags the review as 'untrue' (as it is in this case), especially in the case of high value businesses - it is time to stop treating pizza parlours and the professions the same way with reviews.

Google would respond by saying that the business has the right-of-reply (and our client has replied to the review above) but there is no right-of-reply to the damage the 1* score has done to the business's overall score (they are recent clients and are just starting out on their journey with reviews).

We would strongly suggest that aggregate scores should be irrelevant for certain types of service business - it's OK to choose a pizza because the parlour scores 4.4 out of 5, but a lawyer or a wealth manager? People should be reading the content of the reviews.

Two very similar businesses in the same location - very different profiles on Google. If they both received a 1* review tomorrow the one on the right's score would remain at 4.9 and the one on the left's would fall to 3.0 - failing the Google filter. Another? (it's not beyond the realms of possibility - their first review was written by a Local Guide, and we've already established how some of them behave): the score for our cleint remains the same, the other business falls to 2.3.

But before that particular pig flies (it is a conundrum that Google - and other reviews solutions - will have to address eventually, but we don't advise holding your breath) - our advice to our clients is to build critical mass with their reviews. Your Google score is a pure mathematical average, so the impact of a single 1* review is far less if you have lots of four and five star reviews, but don't forget that those considering high-value businesses will read the actual content of your reviews - always the negatives first, so meanwhile do everything you can to minimise the chances of someone being given cause to write such a review.