Amazon fake reviews - just the tip of the iceberg? 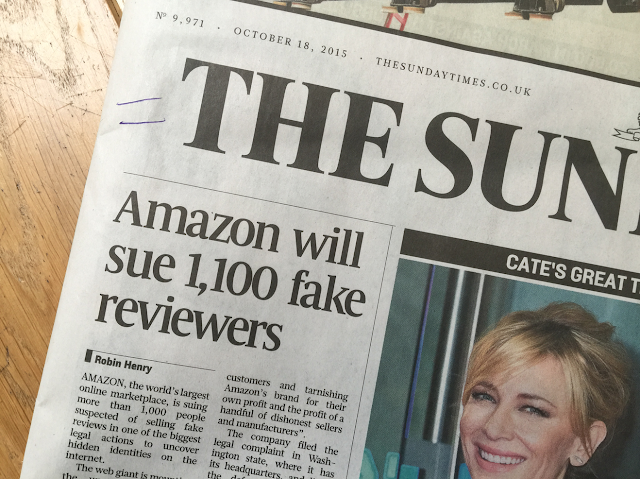 The Sunday Times returns to one of its (and our) favourite campaigns this week: against fake reviews (here is - for those of you who can negotiate their pay-wall - the full article and their famous 'fake hotel' expose of TripAdvisor) . And while we commend Amazon's stance against publishers and writers puffing their own work, we are not sure this is any better or worse than what happens in the mainstream (getting friendly authors to write reviews and/or flyleaf quotes); perhaps there needs to be a website 'outing' authors who are friends?

But there is a very serious side to this, and it goes right to the heart of the world of reviews. And there's much more to it than just 'fake reviews'.

Let's start at the beginning: why would anyone run a review website (or incorporate reviews into their website)?

To make money (surprise)! Amazon knows full-well that reviews drive business, and not just book reviews, reviews across the board. That's fine as long as the consumer does not suffer. But look at some of the strategies and business models in place today and ask yourself if the consumer really benefits:
Now: why would anyone want to write a fake review of their business?

Because great reviews drive business, it's as simple as that. Let's mine down a little further:

What should we do if we suspect there are fake reviews about our business?

This question may be more relevant than you might at first expect. In almost half of new businesses we visit we see reviews that Google would categorise as 'fake', they have been written:
You might be surprised to hear the justification that we hear: "But we are a great business, I only wrote the review because none of my customers had."; "Why shouldn't I review my own business? I truly mean every word of what I wrote." and the list goes on.

None of these fall under the category of 'malicious fakes'; malicious fake reviews are posted as part of a concerted and intentional effort to deceive. Unsurprisingly, when you think about it, we don't often have face-to-face meetings with the businesses who are actively gaming the system (we once did meet with one who introduced us to an intern: 'This is [name], she writes our reviews on [X website]'. They instinctively know to steer clear of us. But we know who they are (and if we do, you can be sure Google do too).

How do we identify fake reviews?

It's part science, part art. In last night's Antiques Roadshow a woman presented Rupert Mass with a painting she reckoned was a genuine Turner. He tried, as tactfully as he could, to disabuse her, first by explaining that he had been looking at the real thing for over forty years and he 'knew' it was not a Turner, then, when she persisted, he referred her to the framer's date stamp (1872); Turner died in 1851 and stopped painting Venice over fifteen years earlier.

For us it's the same. Our moderators read hundreds of reviews every day, so, just like Rupert Maas, they get a 'nose' for fakes. They also know just how to do their detective work. Let us show you just one example:

An estate agent has great Google reviews. Our moderators are asked to have a look at them. Out of the first ten they are able to positively identify that six were written by connections of the business. How? By cross-referencing the business's own website (estate agencies invariably include staff biographies on their websites) with G+, Linkedin and Facebook (and not always the 'suspect's' own Facebook or Linkedin page). In one case a review had been written by a colleague who had used the same photograph for his G+ account as his Linkedin entry, in another Linkedin identified that the reviewer was a recent ex-employee of the company under review. The other four were similar, the balance failed the 'nose' test ('fake' reviews often follow a distinctive pattern, avoiding the use of the first person 'I, we' for instance).

We see this occasionally, never - yet - from a client of ours, but about once a month a competitor (we assume) tries to sneak a negative review through Resolution, without success. We make it clear to all our clients that we have a 'two strikes' rule - first strike: warning, second strike: out. We couldn't be more aware that the one thing that sets our reviews apart from mere testimonials and most other kinds of review is the fact that they can be relied upon by your potential customers; not just ' a bit', not just 'most of the time' but all the time, one hundred per cent.

There's no shortcut. If you want great reviews on your own website and anywhere else that influences your potential customers (Google for most, still TripAdvisor for many in hospitality) you have to get a system like Dialogue™ on board (you can't verify your own reviews!) and then work hard at getting your clients to write reviews. It's not impossible - see this success story.