The reach of a single negative review...

As many will know, Google reports to its Local Guides - telling them just how many views their reviews are getting. Here's just one example... 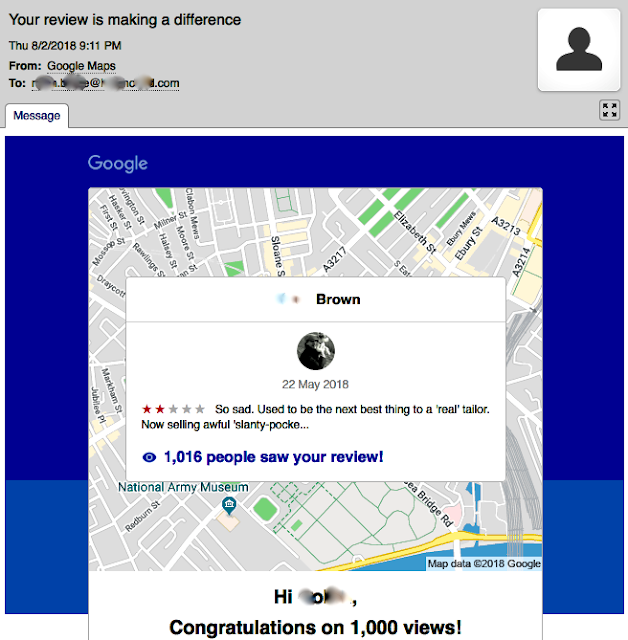 What can we learn from this email?

First, the reach of this review - of a SME business in London - has been pretty astounding, at over 1,000 views.

Second: it has made that kind of impact over such a short space of time - the review was written on 22 May, under three months ago.

In other words: (negative) reviews get seen!


What action should a business in this position take?

This business is committing two cardinal errors (both easily rectified) - and missing one massive opportunity. First the errors...

Assuming this business, like most businesses, is good at what it does (but occasionally makes mistakes - enough to provoke a customer into posting a negative review about once every six months): It should be proactively engaging its customers by inviting them to post reviews.

Suppose a business has a footfall of a hundred customers a day, if only one per cent - just one customer - writes a review, then that's thirty reviews a month (three a day? That's still three reviews a month - 36 a year).

How to get the customers to write a review?

Simple - and good businesses have been doing it for so long we know it works...

The first objective should be to have at least 95% of the business's reviews scoring it positively. That, in turn, will result in...

When this business joined HelpHound it had less than a handful of reviews. This is the impression it now creates every time someone looks it up on the web (the 'Reviews from the web' at top left - all 511 of them - are the reviews it has on its own website, invited through HelpHound)... 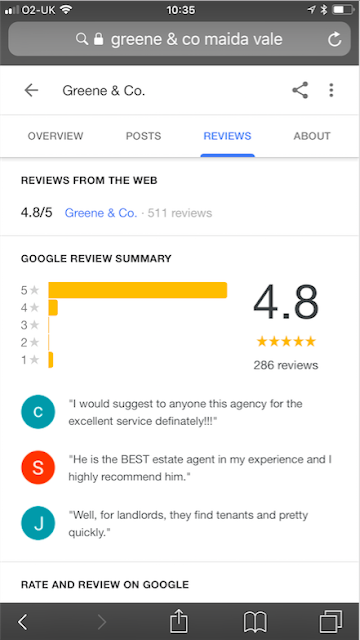 Which will then show in increased business!

Don't be afraid to engage - HelpHound is here to help

Many businesses don't engage with Google reviews because they are concerned - quite understandably - that they will attract unfair or inaccurate reviews, and that those reviews will have the exact opposite of the desired effect (which is, of course, to attract more customers). Greene & Co - the business in the screenshot with 286 Google reviews - were no exception.

HelpHound exists, at least in part, to ensure that its clients' reviews accurately reflect their businesses. We cannot guarantee that a HelpHound client will not get any negative reviews - no business is perfect, after all - but we can reassure you that having your business's reviews moderated by HelpHound pre-publication will reduce the chances of an unfair or misleading review appearing in print to as near to nil as will make for confidence in embarking on this important journey.

Here's an article that goes into this important part of our service in greater detail.

And here's one that shows you that professional review management drives more business (the numbers are from Google itself).

Oh - and please bear in mind that if a business invites reviews it is subject to the CMA regulations, and they have the force of law (they say a business must allow all its customers to write a review at a time of their - the customer's - own choosing). Here is an article that explains these rules.