CMA to investigate Amazon and Google over fake reviews 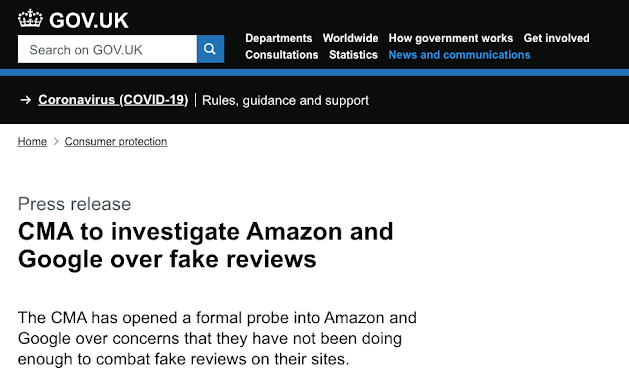 Here is the full text of the CMA's announcement

The CMA has repeatedly stated its determination to address the manipulation of online reviews, ever since its first open letter on the subject back in 2016.

They are, as is usual for government agencies, acting both top-down and bottom-up. This action is part of their top-down activity (bottom-up action currently primarily consists of reacting to whistleblowers implicating individual firms in breach of CMA regulations relating to cherry-picking and gating reviews). 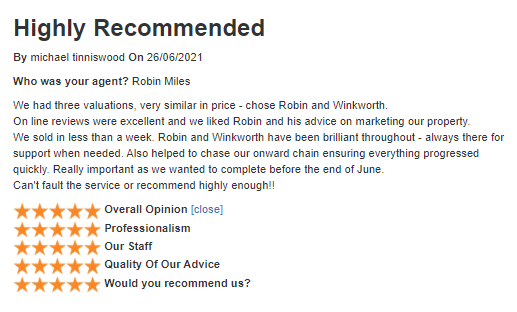 We see more and more references such as this "online reviews were excellent" in the review content; just more confirmation of the value attributed by consumers of all kinds of goods and services.

The CMA's reason for taking action is straightforward: fake or otherwise unreliable reviews cause direct harm to the consumer, by misleading them into buying one product in preference to another, possibly of better quality or more suitable, or using one service over another less apparently well-regarded thanks to fake or manipulated reviews.

Manipulation of reviews by businesses, whether by posting fake reviews, only inviting 'happy' customers to write reviews or by using other mechanisms - gating, for instance - to positively impact their review scores and/or to ensure an unrepresentative number of positive reviews are written is equally misleading.

Fraud - and therefore, by definition: breach of the CMA regulations - is widespread. Harm, in the context of product reviews, almost certainly impacts SMEs with limited marketing resources more than the consumer. The consumer may end up with a substandard product but the worst outcome will probably be 'throw it away and start again', highly irritating but survivable.

But in the case of high-value services, the opposite is true: a patient that is misled by manipulated reviews into using a substandard medical professional or an investor misled into using a subpar investment adviser can be caused immense harm, physical, mental and financial, sometimes - often? - all three.

This is the crux of the matter facing the entire web, not simply Amazon and Google, and regulators worldwide: how much longer can the status quo persist without consumers being worn down by businesses abusing reviews, not to mention honest businesses being done down by their less-than-scrupulous competitors?

Take these two business's ratings and number of reviews on Google (let's call them A and B for the sake of anonymity):

Difficult to choose between them, right? On the face of it - absolutely, after all, what is 0.1 between friends?
But let's delve a little deeper; business A has this on their website:

It refers to the reviews the business hosts on its own site and includes a vital indication that the business is complying with the law, by inviting any customer and any visitor to their website to 'Write a review' whenever they feel like doing so.
Underneath the reviews is this link:

It leads directly to a full explanation of the review management system the business is using, which includes this important paragraph:

Business B?
It is difficult for consumers to accurately and definitely establish that any given business is contravening the regulations regarding reviews. But here are some pointers:
For the regulators
This is a very different story: the CMA has legal powers of investigation and confiscation and has used them in the recent past. Businesses that cherry-pick and gate leave a highly visible record of such behaviour on their computer hard drives that remains there for years to come.
So: just because the CMA is not currently paying visits does not mean that businesses flouting their rules will not face action. We have consistently advised businesses that compliance is a priority and that the publicity flowing from a fine for non-compliance is simply not worth the risk. Especially given that they are able to take the route Business A has taken.
And finally...
Speak to us. Become compliant. Look great in search. Watch the calls and clicks mount up. Sleep at night.