Review Management - how does your business score? [Hotels]

We use this as a 'quick and easy' benchmarking tool before we meet new clients. See how you fare: 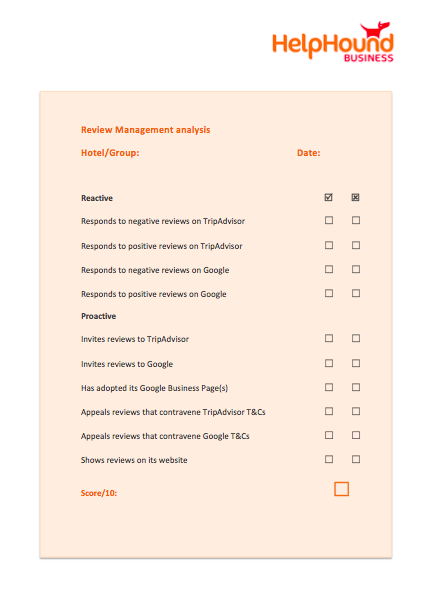 Needless to say, once you become a client, we won't relax until you're scoring a perfect 10!

Here are the five core questions asked by almost every estate agent before they join:

Question 1: Will we get more enquiries?

Answer: Yes. Your prospective clients are actively looking for reviews, give them those reviews in a verified and credible format and they will make that crucial initial contact.

Question 2: Will we get more conversions?

Answer: Yes. Show reviews to potential clients and they are more likely to convert.

Answer: Yes. Send the invitation to review to your ongoing clients (landlords, for instance) on a regular basis and the response will help you identify those who might be thinking of moving agents. Dialogue is a great early warning system.

Answer: Yes. Dialogue will channel negatives away from public sites whilst at the same time enabling you to invite your happy clients to post there.

We don't ask our new clients to sign a contract for six months. That gives them plenty of time to prove Dialogue's value.
Posted by HelpHound at 11:22 0 comments

There's an awful lot to Dialogue, but the core can be boiled down into the answers to five basic questions that we always asked when we first meet a client:


Question 1: Will our rankings and scores improve?

A: Yes: Dialogue will get you more positive reviews and less negative reviews to TripAdvisor (and/or Google), less negative comments to Booking.com and the other OTAs. This will begin to impact your rankings and scores immediately you join.

Question 2: Will we get more repeat guests?

A: Yes: Guests return to your hotel either because (a) they enjoyed their stay or (b) because you were able to address whatever issue they had when they last stayed. Resolution™ enables you to address those issues.

Question 3: Will we get more direct bookings

A: Yes: Guests book direct because they feel confident; Dialogue gives them that confidence.

Question 4: Will we be able to negotiate better rates with our corporate clients?

A: Yes: Your corporate clients want to know that their employees or clients will be happy with their choice of hotel. How your hotel is ranked and scored is a big part of that.

The answers to these five questions, especially number 5, explain why our client retention is so very high. How high? We'll tell you when we meet (to publish the number here might be to tempt fate, and our CEO is mildly superstitious).

It's awards season again - from the Oscars to TripAdvisor awards. It's a topic that always gets raised when we meet clients in January and February, so we thought it worthy of a post here.

Lessons to be learned from award winners


Here's a great article by Fiona Duncan, the Telegraph's travel expert (as many of you will know Fiona also edits the acclaimed Charming Small Hotels guides - here's a link to all the hotels she's reviewed for her regular column in the Sunday Telegraph) which chimes absolutely with our own thoughts, and long may respected travel writers continue to plead with TripAdvisor to make their awards, and, just a importantly, their ranking system, more accurately reflect the experience travelers can expect.

But for now, you, our clients, must make the very best of the status quo, and it's our job to make that as easy and painless as possible. So what can you do that the award winners are already doing? What habits do they have that you can easily adopt?


There's now doubt that the award winners run great establishments, even if (as Fiona points out) they may not be to everyone's taste. But so do the overwhelming majority of hoteliers we meet in our day-to-day working lives. There has to be something else, and there is: they are 'playing the TripAdvisor game'. Wittingly or unwittingly, they are giving TripAdvisor what they want.


Let's look at TripAdvisor's No1 B&B in the whole wide world, Bindon Bottom in Dorset:

They get over 2.5 reviews a week. That's nearly a third as many as the Savoy (which reopened just after them) which has 268 rooms!

But more important than that, we have a very good idea that they ask their guests to write reviews, or at the very least they discuss reviews with their guests. How do we know that? We don't for certain, but there are clues in today's Times article. Lisa, who owns the Bindon Bottom with her husband Clive, says, when questioned about the four star reviews: "One guest said that 'He never gives 5* reviews' and another 'wanted a bigger guest lounge' and the third 'that there wasn't enough drawer space.'" The 'bigger guest lounge' is mentioned in one of the reviews, but there is nothing in the other two to link the guest with the review. It was a habit they probably formed as soon as they opened in competition with the other 17 B&Bs in the village, as they had quite a bit of catching up to do, and hasn't it paid off handsomely?

The other reason we think they actively canvas reviews is the sheer number they get - the next B&B in West Lulworth has 118 reviews (111 excellent and 7 very good, since you ask), but over 7 years. Less than one-and-a-half reviews a month.


Now, some of you are already starting to murmer along the lines of 'that's all very well, but we run an 50/100/800 bedroom hotel, how can we be expected to get reviews in volume?'

Well, our first response to that is that you are streets ahead of the Bindon Bottom in terms of your potential to get reviews, with over 10/20/160 times as many guests staying. It's simply a matter of front-of-house engaging with your guests. Look at what London's No 1 Hotel on TripAdvisor has achieved with 'only' 28 rooms:

And the first 'biggie' in the list, The Corinthia at 7th with 298 rooms:

So, given that ranking = revenue...

Estate agents - what will happen when you join?

All our clients in estate agency have one main objective: to gain more business. Added to that, letting agents need to ensure that landlords and tenants are kept happy (just as selling agents will have an eye on repeat business).

The following is a good guide (and a useful checklist once your membership is underway):

All of which will lead to...

Dialogue is so much more than just a very effective review management system; we will support you throughout your membership to ensure that you make the very best of the opportunities it presents; from initial design and implementation, through staff training on onwards from day-to-day. You will have your own dedicated business member adviser to help and advise

You will be employing the most effective review management system available, backed up by a dedicated team of professionals who will ensure you get the very best results from you membership.

All our working lives we are faced with two key questions:

1. Do reviews really matter that much?

2. Does responding to those reviews make that much of a difference?

Well, thanks to Cornell and Harvard universities, we now have hard evidence to back up what we have been saying all along: a resounding 'Yes!'

Here's a synopsis of over 200 pages of detailed academic work...

Reviews matter in many ways:


Does responding to reviews make a difference?

This was one of the most interesting findings of the Harvard study: reviewers are influenced by what they see before they write their own review, and on top of that finding...

It's all common sense really, but it's nice to have it backed up by academic research!
Posted by HelpHound at 16:23 0 comments

2014 is going to be the year that engaging with reviews ceased to be an option.

Because of the changes to Google for Business*

Businesses will have an option - but it will look like this:

What strategy should you adopt?

As with everything in business: be proactive and seek out the best solution for your business. If that's our Dialogue system we'll be delighted, but simply sitting on your hands will be too great a risk.

Because simply 'doing nothing' will run the risk of enabling a tiny minority of dissatisfied customers to control what other potential customers see about your business on the web. 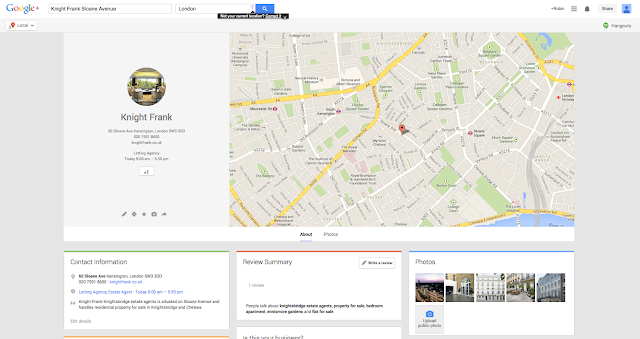 Resulting in the business looking like this in Google search... 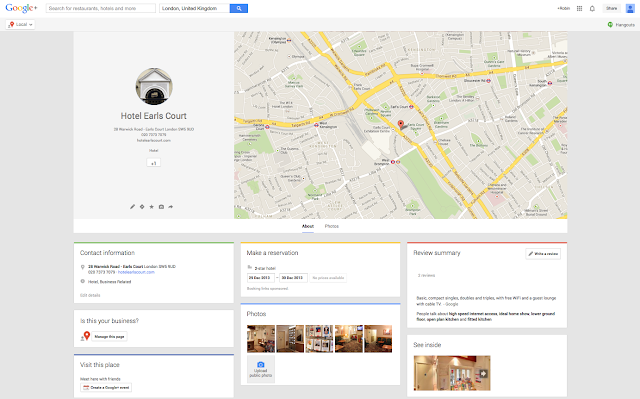 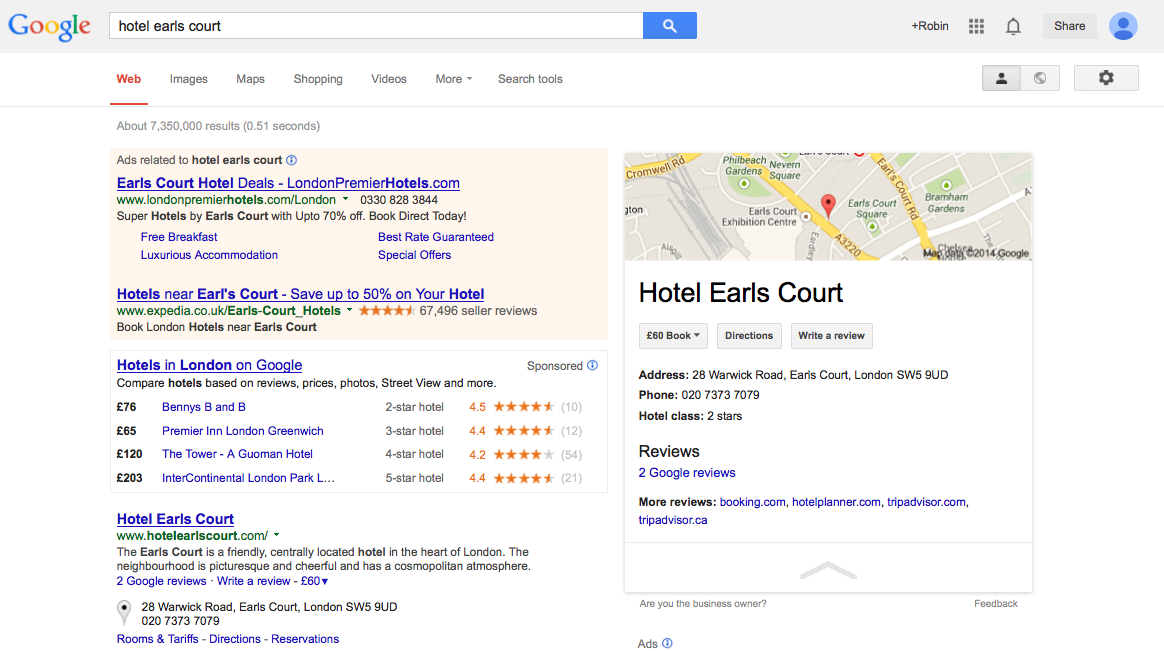 Just one or two negative reviews will have the potential to set a trend that will be hard to reverse.

So - back to your strategy:

If you decide to 'own your reputation' then you can ask your customers to post reviews direct to Google or you can get us to do it for you.

The advantage of using Dialogue

If you ask customers to post direct you run the risk negatives being posted (remember that an unhappy customer is much more likely to post). If you use Dialogue you will be able to address negatives in private. And you will have lots of lovely verified reviews to show on your own website as well.
Posted by HelpHound at 15:42 0 comments

For new clients: Hotels - what will happen when you join?

Every client is different and the results they (and you) will want to achieve will be subtly different, but the following is a good guide (and a useful checklist):

All of which should lead to...

Dialogue is so much more than just a very effective review management system; we will support you throughout your membership to ensure that you make the very best of the opportunities it presents; from initial design and implementation, through staff training on implementation. You will have your own dedicated business member adviser to help and advise

You will be employing the most effective review management system available, backed up by a dedicated team of professionals who will ensure you get the very best results from you membership.
Posted by HelpHound at 12:20 0 comments

The BBC reports that a US court has ruled that Yelp must disclose the identities of those posting negative reviews. 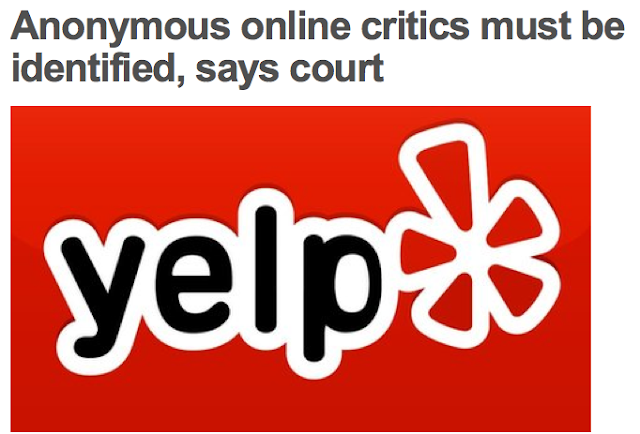 Why is this important?

Because it's the first time a US court has ruled against a review site. In previous cases (and there have been many) courts have consistently ruled in favour of the sites, basing their decisions on the defense of the First Amendment rights of the individual. Here's the critical passage:


"In a statement, the judge said: "Generally, a Yelp review is entitled to First Amendment protection because it is a person's opinion about a business that they patronised."

He added that users had the right to express themselves anonymously without fear of being identified just because another person disagreed with them.

In these circumstances the reviewer would not be entitled to anonymity, he said."

We don't think Yelp's case will have been helped by their own admission, back in September 2013, that "a quarter of their reviews are fake."

This ruling has significant implications for any 'open' site (a site where any reviewer can post any review of any business without having to prove they actually used the business). This type of site includes TripAdvisor and many other big review sites.

Unverified (anonymous) reviews can do untold harm to businesses (especially small and medium sized businesses). Whereas a malicious review of a Hilton hotel, for instance, has the power to be a pain (both financially and emotionally) it will not close the hotel, but such a review of an independent can and has. We met an estate agent last month whose business has suffered financially for the last four years from one malicious review (by an ex-member of staff) on Google.

Verified reviews have to be the way ahead.