Unless it is relevant to review management. In this case, we feel it is justified. Regular readers will remember Botto Bistro from back in October last year. Well, this is an update.

Bottos now have a newsletter. For those of you with five minutes to burn here it is in full (more on their website; this from their FAQ's: 'Q: 'What does your food come with?' A: 'It comes with a plate' - you get the gist). Bottos hate Yelp so much they are fighting back the only way they know how - by actively inviting one star reviews (to the extent of offering a 50% discount as a reward). Is it working? You be the judge... 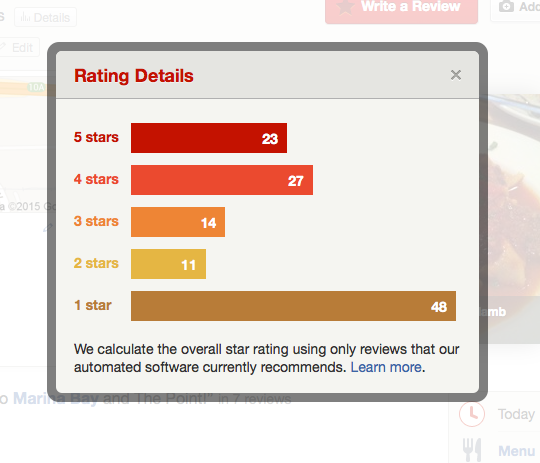 They don't seem to like Yelp or Yelpers. This is what they have to say about them:


"We want to apologize to the Yelpers. We did not realize that Yelp was created for humanitarian purposes. To help the less fortunate, the ones left behind. All these people with no real friends and tons of personal issues, living a sad and lonely life, unheard and uncared for...the ones sitting on the bench of the world, the invisible ones and the sometimes unfairly unwanted.

Finally, they have Yelp! They can open the site and see Steve with 500 written reviews, wow, one hundred followers, double wow, complaining to the world that his pasta did not came [sic] with garlic bread and have everyone clapping their hands...wow, you go boy! You tell them about that garlic bread.

Steve has no girlfriend, no job, no real friends, no chance...but hey, he has 500 written reviews and an Elite badge from Yelp, that is priceless to him.

Yelpers can rely on word of mouth with real friends? Nope, I think we are pretty safe on that one – they don't have that many real friends…all this time they were a little confused, they thought their followers on Yelp were their real friends. Oh well! Never too late to start making new ones."

As we say at the beginning - we only comment when there's a lesson to be learned. The lesson for businesses who don't want to go down the Bottos route is to actively engage with review management, before it's too late!

Google reviews - a small change that may mean more

New today: Google have begun prompting reviews. Taking a leaf out of TripAdvisor's book, now when you review a coffee bar you will be asked to review businesses from your search history. 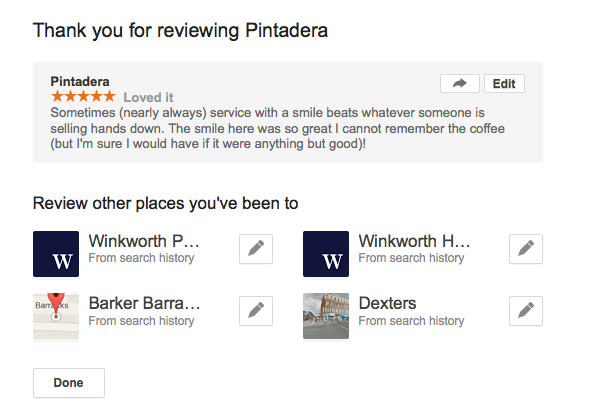 So your customers may only be writing a review of a coffee bar, but they will be prompted to write another, maybe even of you.

This is bound to provide a kicker for Google reviews, by how much we don't yet know (but we will let you know as soon as we do).
Posted by HelpHound at 18:28 0 comments

When in Rome - Restaurants getting reviews right in 2015

For a sector that finds itself so fairly and squarely in the sights of reviewers (and review sites), many in the restaurant industry has been surprisingly slow to formulate effective solutions.

Here we outline our own solution, but first let's examine two examples - one a restaurant in Rome, another closer to home in London.

Tucked away off the beaten track in Trastevere - 'across the Tiber' - this cheerful (and typically Roman) venue takes TripAdvisor seriously, very seriously indeed. Just how seriously? below are the cards one of our directors was given when visiting recently... 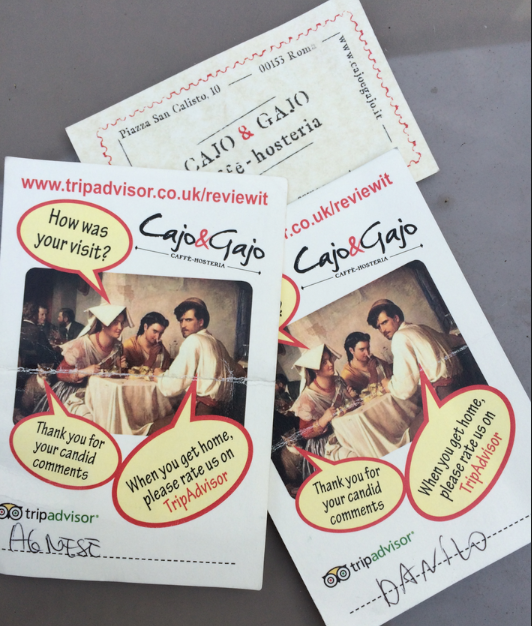 The first (small card) came with the bill, the second was handed by the waitress in person ('Agnese') and the third was handed by the assistant manager ('Danilo') on departure. When quizzed as to the restaurant's policy Danilo happily explained that "tucked away in a back street, away from the main tourist route, the restaurant's owners decided that they needed to adopt a very proactive policy to get reviews to TripAdvisor, we even get individually rewarded when someone mentions us by name."

Has it worked? Well, they're ranked in the top 5% of all Rome's nearly 9,000 restaurants. What is even more unusual is that they have achieved this in less than nine months. By inviting reviews; they have 689 reviews, all but 82 of which rate them as 'excellent' or 'very good'. As a result the restaurant was packed on a Monday lunchtime in January.

This (in our directors' opinions) great restaurant has been open slightly longer (end 2013), and has a great pedigree. The food and service are as close to impeccable as can be. yet the restaurant is not always full - even on a Friday night.

So let's look at their track record on TripAdvisor:

They are ranked in the mid-4000's. In just over a year they have been reviewed just fifty-one times, and sixteen (30%) of those reviews rank the restaurant 'average', 'poor' or 'terrible'.

Is to refine the Cajo & Gago solution. For two reasons: the first is that a fine dining establishment might reasonably say that bombarding their clients with requests to review, in-restaurant, does not sit well with their ethos. The second is that there is a better way.

Hand each diner a card and a pencil at the same time as presenting the bill. Explain that they may like to let the restaurant have their email address. If they do (and there's no pressure) they will be sent useful information (changes of menu, offers for regular clients - not 'marketing'). The card itself will make clear that 'your email address will not be shared with anyone'.

The results will be immediate and sustained. And, as a bonus, the restaurant will be building a great database of diners for its other marketing.

and this is a screenshot of their Google score

Dialogue is immensely effective - so effective that it often results in clients showing no negative reviews at all, on their own websites or on Google. This leads to an understandable question from our potential clients:

"Does this impinge on credibility?"

In order to answer this important question we would ask you, our reader, to put yourself in the position of a potential client of one of our clients, and ask them the self-same question, but this time be blunt:

"I have read the reviews on your website and they are great, but surely you must have some unhappy clients, why don't you show reviews from them?"

"If you go to write a review on our website you will see this:

"If you go to read reviews you will see this:

"HelpHound, who operate this system for us, promise to publish any review - any review at all - but first we have a chance to resolve whatever issue a client may have raised. The reason that we don't have negative reviews showing is not that we are perfect, but that we have a 100% track record (to date, at least!) of resolving any issues our clients have brought to our attention.

"Is that the kind of business you were looking for? Not one that claims to be perfect, but one that has a perfect track record of putting things right if and when they do go wrong?

We hope this addresses the issue of 'looking too good' for everyone.

Not our headline, the Financial Times's. On 22 December Italy's antitrust regulators fined Tripadvisor €500,000.


We would have more sympathy for TripAdvisor if, in its defence, it cited the precise methods and resources it devotes to combating review fraud. Instead their spokesman said it was a “force for good” and its systems were “extremely effective in protecting consumers from the small minority of people who try to cheat our system”.
We are getting a little tired of hearing this line trotted out time-and-again. What exactly are TripAdvisor's 'systems'? (TripAdvisor: please feel free to comment on this blog post, and 'No' we don't want to know the precise details of your 'secret algorithm', just sensible businesslike guidelines).

For now we don't know what systems TripAdvisor deploys. And we suspect they don't either. When directly asked by Evan Davis on Radio 4, this was Steve Kaufer's response:

Evan: "Steve, how reliable are your reviews?"

Steve: "We have, you know, dozens of people, an entire department frankly, set up to focus on automatic detection of reviews that are suspicious. We have enough reviews so that there's this image of honesty in numbers. No-one is going to pay attention...to the review that is all terrible."

Steve, we'd love to know more about that 'entire department' and their focus on 'automatic detection'. How do hoteliers contact that department, for instance?

When TripAdvisor was censured by the ASA in 2102 the ASA said:

"TripAdvisor said, because trust was such a key component in the site’s ongoing success, they had invested heavily in systems, processes and resources to identify and minimise fraudulent content: they provided details of their anti-fraud systems in confidence.
We noted that reviewers were asked to agree to a declaration that their review was their genuine opinion of the hotel and that they had no personal or business affiliation with the hotel, or been offered an incentive to write a review for it. We also noted that reviewers were not asked to similarly confirm that they had no competitive interest in the place they were reviewing, or were posting a review on behalf of a competitor or other interested party, and we did not consider that agreeing to a declaration in itself would necessarily prevent non-genuine reviews from being posted on the site.

Notwithstanding that, we understood that reviews could be placed on the site without any form of verification, and that whilst TripAdvisor took steps to monitor and deal with suspicious activity, it was possible that non-genuine content would appear on the site undetected.

We noted that TripAdvisor allowed hoteliers a ‘right of reply’ to critical or negative reviews posted on the site and that they believed that users of the site had a healthy scepticism as a result of their experience of review sites more generally. However, we did not consider that consumers would necessarily be able to detect and separate non-genuine reviews from genuine content, particularly where a hotel or other establishment had not received many reviews, and nor did we consider that a hotelier’s response in itself would go far enough to alert consumers to, and moderate, non-genuine content."

The ASA was effectively saying that TripAdvisor's 'anti-fraud systems' were so ineffective as to make their claim to publish 'trusted reviews' unsupportable. We think it is high time TripAdvisor told its millions of users (not to mention its investors) what those systems are.
Posted by HelpHound at 15:32 0 comments