Reviews: so many choices - but only one long-term solution

Let's assume your business realises that it does need some kind of solution to reviews. What mechanisms are there, and what are their downsides?

Here's a return for a typical Google search any business might reasonably be expected to make... 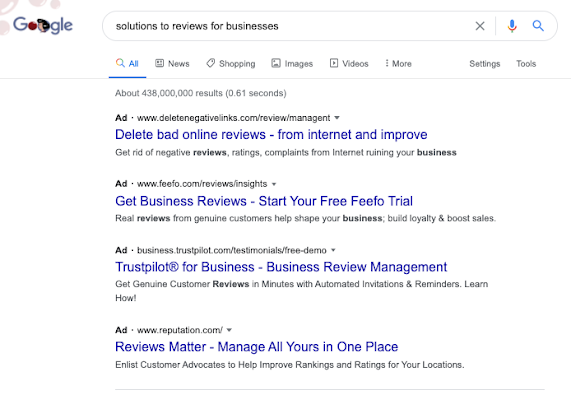 So let's examine the offerings by those paid advertisers (we'll exclude the top result - it's a link farm, and they're to be avoided at all costs)...
Feefo
Useful for product/online retailers, where there's no temptation to game, but not fit for purpose where complex services are concerned. There are also issues surrounding compliance with UK law which requires review solutions to allow reviewers to post at a time of their own choosing and without being specifically invited. Feefo's system is 'invitation only', which is probably OK for products such as clothing or household wares (although some might reasonably suggest that a review posted two years after purchasing a washing machine has more relevance and use for your fellow consumer than one posted when it's fresh out of the box), but not for financial or legal services, estate agency or medical/health. And they own your customers' reviews, you don't.
Trustpilot
A less visible and less credible alternative to Google with far less reach. With a monthly fee payable for its most important benefits, and reviews that you never own (they do). It has been repeatedly criticised for its 'quarantine' system whereby businesses can have a review suspended pending 'proof of purchase'. Its sales methods have also come under scrutiny as ex-sales staff claim that they were advised to cold-call businesses that had recently received negative reviews on their platform.
Google (alone)
Free reviews. Free widget. But no moderation. Why is moderation so essential, especially for the professional services sector? See '*Moderation' below.
Reputation.com
Why not just import the Google widget for free? If you need a reporting function any software developer will build you one that won't tie you into a monthly fee. Again, unmoderated, which tempts business users to gate and cherry-pick happy customers to post reviews, both illegal in the UK (for a definition of both read this). Potentially damaging unfair and or/inaccurate reviews posted to Google are automatically imported to the business's site via their review display widget. Again - see '*Moderation' below.
Other sites that host reviews...
Yelp
The big daddy of them all, after Google of course; retired hurt from the UK and EU in 2016.
Yell
Yes, it still exists, although quite how or why eludes us.
Checkatrade - and similar sites
These are lead generators for trades that rely on their members lack of understanding of just how Google works. They are paying up to 20% commission on every job, where, if they committed to Google, they would be able to spend that 20% on their own marketing. Or, as one tradesperson we spoke to said 'If I needed to spend twenty per cent of my turnover to generate business I wouldn't be doing my job properly'.
In the same search that returned the ads above, Google even returns this on page one... 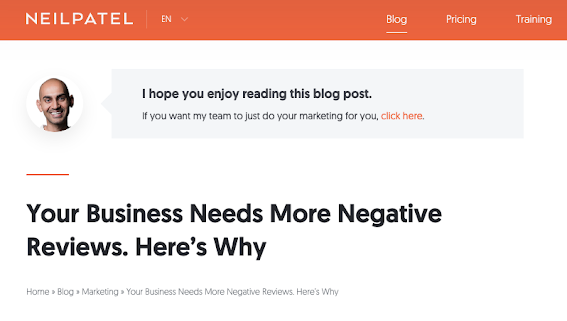 The author of this article has patently never been on the receiving end of what we call a 'killer' review. What is a killer review? It is a review that stops the phones ringing.
Last month there was a well-publicised case of just such an occurrence, when a firm of solicitors received such a review. The result? A documented fall-off of inbound enquiries to the business of nearly forty percent (this was proved to the judge's satisfaction by the firm in question). Just the one review - and, thankfully for the business concerned, on Trustpilot, not Google, where every single person searching for the business would have seen it and the impact would have been far greater.
*Moderation - the only way to fight back against inaccurate/malicious/fake or misleading reviews
Aside from all the other obvious functions HelpHound performs for both its business clients and its reviewers - principally displaying those reviews on the business's website and then enabling the business and the reviewer to get the review copied across to Google - there is one which they may not initially pay much attention to, or place much value upon, and that is our moderation function.
But when it is needed? It can save a business's life, literally.
How does it work? Beavering away behind the scenes is our moderation team; they read every single review before it is posted on every single one of our clients' websites for...
Overriding all of this - and moderation probably only applies to one in two hundred reviews anyway (but, my goodness, when it does, both reviewer and business under review are so glad) is the reviewer's absolute right to have whatever review they wish published - we would be acting in disregard of the CMA regulations if we did otherwise - but we always remind reviewers that the business also has and absolute right to have their response published right underneath the review in question.
Moderation - it's not just 'nice to have', it's essential for professional services
Posted by HelpHound at 12:25