Trust - is EVERYTHING where reviews are concerned

If you cannot trust reviews, what is their point? Our answer: there's no point at all. 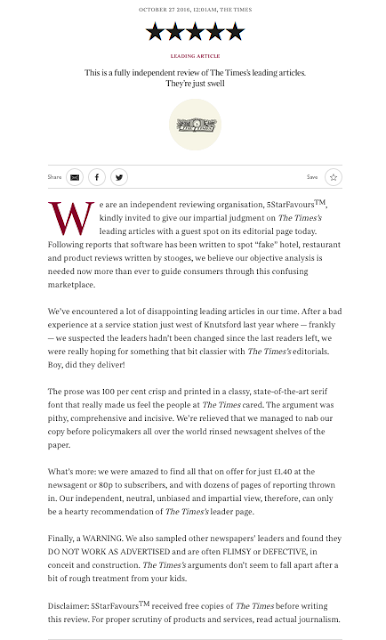 It's not often that the Times makes reviews the subject of their leading article, but they did today - and the punchline is, as you can see, that you can't trust them, and, for 'proper scrutiny of products and services, read actual journalism.'

You might expect us to launch into a defence of reviews, but we are not going to. Why? Because we agree with much of the thrust of what the Times is saying.

Before online reviews there was advertising and there were testimonials and there were reviews written by journalists. At least with advertising you know the business is putting its own spin on the message, and with testimonials it's the same - have you ever read a critical testimonial? And, while we're sure the Times' journalists have never been guilty of this - there were reviews written by journalists who had benefited from the product or service under review. From free holidays to long-term 'loans' of products from food-mixers to motor cars.

So along came the web - and with it, online consumer reviews. But there were, and still are, reviews and reviews.

Reviews should be the answer to all consumers' prayers: honestly held opinions, freely available for all to see before a product is purchased or a service is contracted.

It's - still - a minefield. Why? Because of two things: human nature and the business interests of those publishing the reviews.

It's not compulsory to write a review when you've purchased a product or stayed in a hotel. So who does? Leaving aside those kind folk who see it as their life's mission to help people they have never met find the ideal toast-rack, it is much more likely to be someone who is dissatisfied (about 15 times more likely according to Cornell School of Hospitality's research). And this tilts the playing-field away from the product or service. In the world of online reviews if a product or service scores 9 out of 10 (or 4.5 out of 5 in Google's own world) it's probably pretty near perfect. Just because you cannot please all of the people all of the time - one person's ideal hotel is another guest's hell-on-earth.

But - on this benchmark - why are so many businesses we see on the web pretty near perfect in terms of their reviews and scores? It would be charitable to think that, because businesses mostly strive to be as good as possible, for purely commercial reasons, then most of them come close.

Just for a moment let's look at a recent example of a business where the online reviews are in conflict with one of the Times's august journalists: 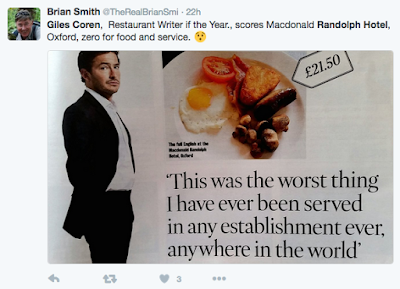 Before you leap to point out that he's just reviewing the breakfast, the full article makes plain that he's reviewing his stay as well

And here's the same Hotel on TripAdvisor:

And here's a guest review written a week after Mr Coren stayed:

We're not saying this review is fraudulent, just that, with TripAdvisor doing as little as they admit to doing currently to check the veracity of their reviews and reviewers, it could be. As could any of the other reviews - written by the business (positive) or their competitors (negative).

What can we learn from this? It would be nice to be able to say that Giles Coren and 'aday375' (for that is the TripAdvisor reviewer's username) have differing requirements and standards, but, unfortunately it's not as simple as that. Because we don't know for certain that 'aday375' is a bona-fide guest. And this is of fundamental importance as far as HelpHound is concerned: if the review platform cannot stand behind its reviews, or is not doing its utmost to ensure that all its reviews - and reviewers - are genuine, then we think consumers should be encouraged to view it with a deal of scepticism.

"Because we have been tracking reviews for 16 years, we can spot what is normal reviewer behaviour and what isn't. That said, the world of fraud is an ever changing landscape."

For reasons better known to TripAdvisor, in spite of their acknowledgment that 'fraud is an ever changing landscape', it is just as easy to write a fraudulent review now, in 2016, as it was in the early days of TripAdvisor. A reviewer can still register with any old Hotmail email address, you can still hide behind a 'MickeyMouse123' username, you still don't have to provide any evidence that you have stayed at the hotel you are reviewing - you don't even have to provide evidence that you have visited the country where the hotel you are reviewing is located! We know, because we opened a new TripAdvisor account today.

It may have been 'good enough' in 2002 when technology was clunky, Mark Zuckerberg of Facebook was still in high school and G+ was not even a gleam in Google's eye. But it is definitively not good enough now. There are myriad ways that a company like TripAdvisor (profit of $63 million on turnover of $1.4billion at last count) could give its reviews, and its reviewers, more credibility. So why doesn't it? Is is because of Abraham Lincoln's old adage that 'You can fool... all of the people'? Or is it, more prosaically, because its share price is influenced by the volume of reviews that are written?

Our message to TripAdvisor: Invest in credibility or, one day, 'all of the people' may rumble you.

It's not only TripAdvisor. We know of another popular review site where, for fairness's sake, any paying business member can appeal a review that they consider unfair, misleading or inaccurate and it will be suspended pending a response from the reviewer. So far so good, but unfortunately our old friend human nature plays into unscrupulous businesses' hands here as well: they found that if they appealed every negative review, very few reviewers would bother to engage with the review site a second time. These sites are now known in the trade as 'nine-out-of-ten' sites because all their savvy business clients score - you guessed it - nine out of ten!

There is a flip side too: sites like Yelp believe so fervently in freedom of speech that a reviewer who has never used or visited a business can trash a business's reputation simply because they don't like something the business was reported as doing in the press.

It gets worse before it gets better: there's one big US site that provides a feed of reviews for it's business customers to display on their own websites. Again: so far so good, until you realise that the business can choose which reviews to display. Sigh!

Thank goodness, from the consumer's point-of-view, that Google got stuck in - better late than never - to the world of online reviews. They made some of the same mistakes in the early days, but they have upped their game recently. At least there are far fewer 'A Google user' anonymous reviews now compared with the early days. But there are disadvantages: it is still very difficult for a business to appeal against a review that is unfair or misleading.

Given the power Google has in influencing consumers - with a huge amount of real-estate on page 1 of search devoted to Google reviews, we think they could usefully loosen up their appeals process to allow patently false reviews to be appealed (we had success for this client whose hotel had been maligned by a sofa-bound TV-watching critic, but only after the hotelier had resorted to the national press and we offered to help).

So what about our clients' reviews?

As you might imagine from reading everything we have said so far, we have put a lot of effort into making sure the reviews that our clients display give a fair and accurate impression of our clients' businesses. After all, it's our name on the review on their website.

Let's follow our process right through from invitation to final review - and question every stage:

Stage 1. Our client - the business - sends an invitation to its customer to write a review. Or someone - who may of may not be a customer, visits the business's website and clicks on their 'write a review' button.

How does HelpHound know that the business is inviting bona-fide customers to post reviews? If a business really wanted to get fake favourable reviews published in theory they could - by seeding their mailing list. But we have a strict two strikes rule at HelpHound. If a business is found to have in any way encouraged a fake review they receive a written warning, if they repeat the behavior they are put into purdah pending an investigation (no more reviews will be published). If the investigation establishes that there is malice aforethought (as opposed to an intern 'trying to be helpful') their membership of HelpHound is terminated.

Why won't we accept abuse? We don't consider that abusive reviews help anyone - consumer or business. If a consumer wants to abuse a business, including using 'foul and abusive' language there are websites like Yelp that will happily publish their views. The core ethos of HelpHound is built around the concept of businesses and consumers working together to ensure, as far as is possible, a satisfactory outcome for both. That does not mean that the consumer cannot rate the business one star as well as giving it a thorough going-over, it just means they have to use the kind of language acceptable in a family newspaper.

Stage 3. Either: Positive reviews are published to the business's HelpHound module displayed on their website, whilst simultaneously an email is sent to the reviewer telling them that their review has been published and inviting them to copy their review to a second platform of the business's choice (Google, or Facebook or TripAdvisor - or any other open site).

Can the business/reviewer respond? Yes. If the positive review is subsequently established to be inaccurate or misleading can it be deleted? Yes, but the reviewer will be invited to post a revised review.

Stage 3. Or: Negative reviews are sent to the business for comment. An email is sent simultaneously to the reviewer informing them and reinforcing their right to have their final review published, whatever the business's response to the reviewer - we call this system Resolution™ because it is specifically designed so consumers can resolve issues with the business concerned. In theory the correspondence between the reviewer and the business has no cut-off point. In practice it is unusual for either party to communicate more then once or twice. 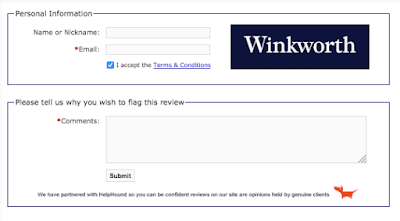 Can a complete outsider influence our moderation policy? yes, anyone - absolutely anyone - can flag any published review on a HelpHound clients' site and it will be reviewed.

There is a downside of this for HelpHound: we cannot work for or with a business that is not seriously committed to excellence in customer service. Because bad businesses will look bad thanks to our system. Their customers would rightly insist on their negative reviews being posted - and they would end up scoring badly. But that's the only way we are happy to stand four square behind what we do.

At HelpHound we have done our utmost to make this system as fair to all parties concerned as we possibly can whilst retaining everyone's trust. Resolution is very popular - we often get positive comments from users - and effective. But if you have any suggestions about how we can refine or improve it please comment.
Posted by HelpHound at 17:17