An open letter to the Competition and Markets Authority

Back in August of 2016 the CMA wrote an open letter to businesses regarding reviews. It began like this... 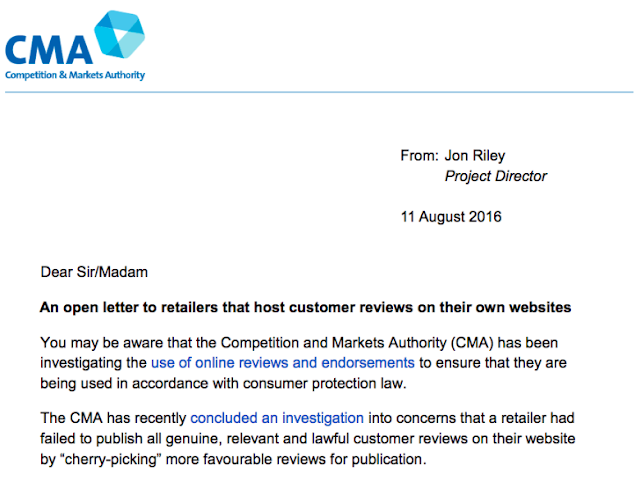 Here is the full text of the CMA's open letter and our accompanying commentary.


And it referred to their 'Dos and Don'ts' for reviews sites and businesses using those sites... 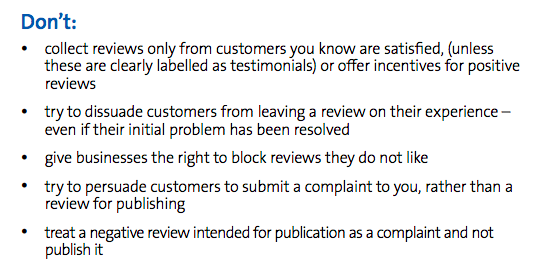 The full text of the CMA 'Do's and Don'ts' is here on their website.

Here is the text of our open letter...

Consumers have come to rely more and more on online reviews when deciding which product or service to purchase. In 2016 the CMA itself estimated that 'over half of UK adults use consumer reviews'. The intervening three years have seen a seismic shift in the area of service reviews (reviews of businesses and professions as opposed to product reviews). Google is now unequivocally dominant in this area.

At HelpHound we are increasingly concerned that abuses in the way businesses (and some of the reviews sites) approach reviews are wilfully misleading members of the public. Let me explain.

The CMA 'invented' this description in relation to reviews. As you know, it refers to the practice of selecting those customers most likely to post a positive review and then inviting them, and only them, to do so.

The process of pre-qualifying customers to establish the kind of review they are likely to write. First used by app developers (anyone downloading an app would receive an invitation to rate the app, if they selected five stars the rating would be posted straight to the app store, anything less and they would be invited to 'give feedback'). Now commonly used by businesses of all kinds and in a variety of ways.

In the two-and-a-half years since your office issued the Open Letter three things have happened:


If the regulations were working:
Giving consumers an accurate guide as to which businesses to use.

*this is a very important point. Many well run and intrinsically honest businesses have made a conscious policy decision to avoid all engagement with online reviews. They wish to be compliant with the CMA regulations but see their competitors flouting them; they see no honest - let alone compliant - way of competing, so they do nothing. This is demonstrably not in the best interests of consumers.

What has actually happened?

Businesses have learned more sophisticated ways of 'gaming' reviews (refinements of cherry-picking and gating). Here are just a few examples:

As if all this were not enough, we are now encountering businesses that are bluntly saying 'the CMA has not acted to prevent [our competitor - or any other business] engaging in illegal practices so we have no option but to do the same ourselves'.

We would urge the CMA to use its powers on behalf of UK consumers to censure such businesses that are in breach of your regulations governing online reviews, so that consumer and business confidence that is fast being eroded (by the likes of this recent article in the TImes) begins to be restored.

We will keep readers - and our clients - posted as and when the CMA takes any action.